10 Dec Maternal Ingestion of Placenta Has No Proven Therapeutic Benefit 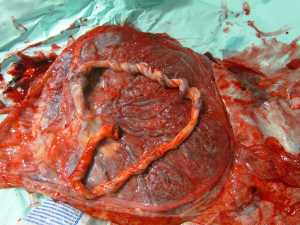 Response: Over the last several decades, human maternal placentophagy (postpartum ingestion of the placenta by the mother) has emerged as a rare but increasingly popular practice among women in industrialized countries seeking its many purported health benefits. Human placentophagy advocates, including many midwives, placenta encapsulation specialists, lactation consultants, and mothers who have experienced positive results previously from the practice, regularly claim improved lactation, energy levels, and postpartum mood, among other benefits, as a result of placentophagy. These advocates regularly speculate that these self-reported effects are likely due to (beneficial) changes to postpartum maternal hormone profiles as a result of the practice. While maternal placentophagy is ubiquitous among land mammals, including our closest primate relatives, recent research has shown that human maternal placentophagy is unknown as a traditional cultural practice. The conspicuous cross-cultural absence of maternal placentophagy among humans (as a long-standing traditional practice) thus remains a mystery. Our study is an important first step in the scientific (evolutionary and clinical) investigation of this rare but increasingly popular maternal practice.

Our study was a double-blind, and placebo controlled trial, meaning that there was a placenta group and a placebo group, and the participants and researchers didn’t know which supplement a participant had until the end of the study. We included 27 healthy women, recruited during pregnancy, who met with the researchers 4 times across pregnancy and early postpartum. At each meeting, they answered questionnaires on topics of interest (e.g., mood, energy, bonding, social support etc.), and we collected blood and saliva samples. At the first two meetings, they were not yet taking a placenta or placebo supplement, so we could collect baseline measures for their hormones and questionnaire data. After the second meeting, they were instructed to take either placenta or placebo supplements. Once the study had ended, we compared data between the two groups to identify any differences.

Response: Our study results showed that there were very small, but detectable changes in the hormone levels of mothers taking the placenta capsules — changes which were proportional to the concentrations of the same hormones in each placenta group participant’s placenta capsules (a dose-response relationship) that was not observed in the placebo group. In addition, there were very small, but detectable differences in mood and fatigue levels between participants in the two groups at a specific time point in the study (as opposed to over the entire course of the study). These subtle differences are certainly interesting, and likely warrant future research, but they were not of sufficient magnitude or duration to suggest the types of clear, robust effects that these types of studies are designed to detect.

Response: The main takeaway from our study may be that although it appears ‘something’ might be going on – beyond a placebo effect – with placentophagy, based on the common placenta processing techniques and daily intake schedule used in this study, the effects do not appear capable of providing therapeutic benefits like preventing postpartum depression, or treating a postpartum iron deficiency.

Response: The logical next step would be to conduct a larger study that addresses the limitations of our project. For example, this study had a small sample size and somewhat large windows of time for data collection at each of the meetings, so a future study could have more participants, and narrower windows for data collection to reduce some of the variation. In addition, given our hormone findings, a future study might also look specifically at varying intakes, to better identify dose-response effects.  Future studies might also evaluate whether different placenta processing techniques have differential effects on circulating hormones, or various psychological metrics.  Finally, there may be other potential benefits to placentophagy (e.g., postpartum pain reduction, or improvements in lactation) that we did not assess in our study.