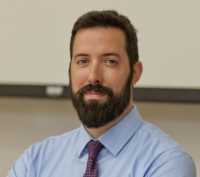 Dr. Burns: Recent technological advances have made it possible to survey all the of microbes that are in, on, and around us. One of the surprising things is the sheer quantity and diversity of the bacteria in our environments and our microbiomes. Many researchers have begun the systematic characterization of the microbes that are associated with specific disease states, including cancer. With regard to colorectal cancer, there have been numerous studies that have identified specific bacteria that are linked to the presence of the disease. There have been many reports that have identified particular potentially important microbes that may be causing the cancer, driving the cancer, or some combination of the two. Among these microbes, one of the best studied so far is a group of bacteria called Fusobacterium.

Dr. Burns: In our work, we set out to perform another characterization of the bacteria in the gut microbiome that are specifically associated with colorectal tumors. We used samples of normal colon tissue from the same individuals as controls, which allowed us to account for much of the variability in the different bacteria we found that might have been simply the result of, for instance, diet. In our analysis, we confirmed the previous results related to Fusobacterium, and additionally discovered a new potential culprit in colorectal cancer, a group of bacteria named Providencia.

The finding of another new set of microbes that might be causing or driving cancer is not surprising. As indicated above, there are many groups who have found other potential candidate microbes that could be implicated in the disease. Our next question was to determine if there was some reason why there might be so many different bacteria that are linked with the disease and what it might be able to tell us about what these bacteria are doing. To that end, we used computational approaches to assess what these two groups of bacteria might be doing at a functional level and if there were any similarities. We found that there was a great deal in common between Fusobacterium and Providencia, including a finding that one of the common functions was related to a large group of virulence genes.

Medical Research: What should clinicians and patients take away from your report? What recommendations do you have for future research as a result of this study?

Dr. Burns: Our findings indicate that there are likely several different groups of bacteria that might be causing or driving colorectal cancer. Despite this diversity of microbes, our analysis indicates that at least some of these bacteria are likely behaving in functionally similar manners. We propose that future work focus on identifying as many of the different potentially pathogenic microbes associated with cancer as possible and also, and this is important, assessing what these bacteria are actually doing in the gut. It may be far easier to design a treatment that specifically targets a single common process that the bacteria use to interact with the tumor than it would be to attempt to design drugs to target the multitude of potentially virulent bacteria.

Moving forward, we are working to perform additional experiments to determine how we can apply our findings in a clinical setting. We envisage that we should be able to analyze the microbes in patient stool samples for the specific bacteria found in our study as well as for the enrichment of virulence-associated genes as a way of both 1) detecting the presence of a tumor and 2) identifying potential therapeutic targets based on the specific functions of the virulence genes found to be enriched.

While we have found clear correlations between the microbiome and colorectal cancer, further work is required to allow us to fully understand what the direct interactions are between these microbes and the tumors. For instance, are these bacteria causing the cancer to form? Perhaps they are only important once the tumor has formed at which point they drive the tumor to expand? Answering these questions will move the research on this topic forward and provide critically important information to clinicians with the potential to improve patient outcomes.