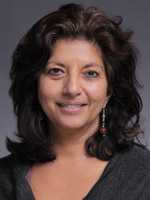 Dr. Mansukhani: Osteosarcoma is a highly aggressive pediatric bone cancer that is almost always advanced at diagnosis. Treatment outcomes have not improved in three decades and 40% of patients eventually succumb to the disease. A few years ago we identified that normal bone stem cells relied on the function of a gene called Sox2 to remain immature an self-renew. We went on to find that osteosarcoma cancer stem cells, that arise from immature bone cells, express high levels of Sox2. Like their normal counterparts, these cancer cells also need Sox2. Sox2 maintains the stemness properties of the cancer cells as well as their ability to form tumors in mice. Depleting Sox2 resulted in cells that had reduced tumor-forming potential and instead, were able to become mature bone cells.

In this new study we have identified the mechanism by which Sox2 maintains the properties of osteosarcoma cancer stem cells. Sox2 inactivates the growth restraining function of the well-known tumor suppressive hippo pathway. Hippo signaling restrains the activity of a potent oncogene, YAP. In the osteosarcoma stem cells, Sox2 directly represses two genes (Nf2 and WWC1) in the hippo pathway and thereby unleashes the growth promoting activity of YAP. Like Sox2, YAP is required to maintain the tumorigenic properties of osteosarcoma cells.

Consistently, we found high YAP and low NF2 and WWC1 expression in human osteosarcoma tissues. Our study makes a direct connection between Sox2 and repression of hippo signaling to enable YAP activity in osteosarcomas. This mechanism also operates in glioblastoma, an aggressive brain tumor.

Dr. Mansukhani: Besides osteosarcomas, Sox2 has now been found to be relevant in a variety of cancers such as lung, esophageal, gastric, ovarian etc. In the case of osteosarcomas, despite recent efforts to map the genetic landscape, no druggable targets have been identified for this cancer. We have defined a pathway that may well represent a druggable target for this disease.

Several drugs that disrupt YAP function are already known. Our studies suggest that these drugs may be useful in Sox2 dependent tumors with suppression of hippo signaling such as osteosarcoma and glioblastoma.