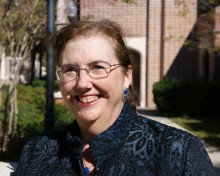 Dr. Altmann: There are a multitude of studies from our labs and others examining the effects of doing a variety of different cognitive tasks while walking or while maintaining postural control, and the results across studies are consistent—motor performance usually declines.  These “dual task effects” are exaggerated in healthy older adults, and are even more pronounced in people with Parkinson disease (PD).  Our study investigated dual task effects during cycling in healthy older adults and people with Parkinson disease.  In contrast to most studies of this type which typically contrast dual task effects of two cognitive tasks, we used an array of 12 cognitive tasks of graded difficulty, from very very easy to extremely difficult.  One of our primary goals was to establish that the dual task effects were directly related to the difficulty of the cognitive task.

Our primary findings were that, instead of cycling slower when doing various cognitive task, both groups of participants sped up, and the amount they sped up was directly related to the difficulty of cognitive tasks.  In the easiest task, cycling speed increased by an average of about 25%, With some participants actually doubling their single task speed. There was no evidence that this increase in cycling speed came as a result of prioritizing cycling over the cognitive tasks, as scores on the cognitive tasks either remained the same or got slightly better.  Interestingly, people with Parkinson disease still showed faster cycling during the easiest tasks, but did not benefit as much from the dual task as the healthy adults.

We attribute our findings to arousal that is triggered by both the cycling and the cognitive tasks which increases attentional resources that can be used for both motor and cognitive processing.  We believe the findings haven’t been documented before because most studies use gait or balance as the motor tasks, and these are much more difficult tasks that demand more attentional resources, leading to the typical findings of dual task costs instead of dual task benefits. The decrease in dual task benefits experienced by people with Parkinson disease, we believe, is due to the effects of Parkinson disease on neurotransmitters.  Both cognitive and physiological arousal increase the production of dopamine and norepinephrine in the brain, and disease processes in Parkinson disease interfere with production of these neurotransmitters, thus limiting arousal-based increases in attentional resources.

Dr. Altmann: Future research needs to explore how concomitant cognitive tasks of differing difficulty interact with different types of aerobic exercise, such as using an elliptical trainer or walking on a treadmill.  This is currently under investigation in our lab.

In general, we need to test whether exercise programs that include cognitive distraction, such as exercise using interactive video games, may actually encourage greater effort from patients, and thus lead to greater health and cognitive benefits of the exercise.