MedicalResearch.com: What is the background for this study? How does Bezlotoxumab differ from other medications for recurrent C. difficile infections?

Response: Clostridium difficile infection (CDI) is now the most common hospital acquired infection in the United States, accounting for significant morbidity and mortality, not only in the US, but around the world. Despite standard antibiotic therapy targeting the Clostridium difficile bacterium directly, recurrent infection is common, occurring in a quarter to a third of patients, often frail individuals with other concurrent medical problems. These patients can have multiple recurrences leading to their progressive deterioration over time. Until recently, the only treatment for CDI included antibiotics. More recently, fecal microbiota transplant is a promising, but as yet, FDA unapproved therapy. Bezlotoximab is a new FDA approved treatment for recurrent Clostridium difficile infection (rCDI) that compliments standard antibiotics. Bezlotoxumab is a monoclonal antibody targeting toxin B produced by Clostridium difficile during CDI. In two large treatment trials, bezotoxumab, in addition to standard-of-care antibiotics, reduced the frequency of CDI recurrences from about 28% to about 18%. In this study, we set out to see if this new drug performed as well in actual clinical practice as it did in the published clinical trials. 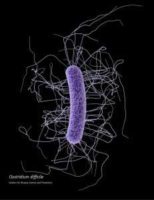 Response: Our study shows bezlotoxumab use in real-world settings leads to similar Clostridium difficile infection recurrence rates as those seen in the previously-published clinical trials, where CDI recurrence rates were significantly reduced compared to use of placebo. This also includes patients who are at particularly high risk, including those with three or more risk factors. In addition, patients in the real-world setting encounter significant obstacles to accessing this drug, much of this relating to prompt payor approval and administration of the drug following diagnosis of rCDI.

Response: Bezlotoxumab appears to be as promising a treatment modality in the real-world setting as in the research setting. However, practicing physicians need be aware of barriers to access, including prompt identification and referral to infusion centers capable of administering the drug, and awareness of payor limitations of drug approval.

Response: Several observations in the course of our study may bear further investigation. Specifically, CDI recurrences appear more common in women than men, in patients with inflammatory bowel disease, and in patients having more than two (versus one or two) prior recurrences. In addition, bezlotoxumab is licensed to be administered during active CDI antibiotic therapy, yet the mechanism of action may not rely on concurrent antibiotic therapy, so this requirement needs to be explored further, such as in the possible use for secondary prophylaxis (after a prior infection that has been successfully treated but in which the patient remains at high risk for a recurrence).

Response: The optimal treatment of CDI, especially CDI recurrences, requires multifactorial, complementary treatment approaches. The mechanism of action of bezlotoxumab complements antibiotic treatment and conceivably other approaches, such as fecal microbiota transplant. I serve as a research advisor to Merck & Co. Inc.