09 Apr One or Two Surgeries To Treat an Infected Hip Joint? 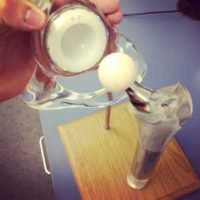 An example of one type of an artificial hip

Response: Hip replacement is a very common operation that is effective at providing pain relief and improving mobility. Infection is a fortunately infrequent but devastating complication that can occur following joint replacement.

Currently, two main types of surgical procedures are used in treating these infections – one-stage and two-stage revision strategies. In the two-stage procedure, the existing artificial joint is removed in one operation and the patient is treated for several months with antibiotics. A new joint is then inserted in a second operation. In the one-stage procedure, the artificial joint is removed along with all infected tissue and a new one inserted in the same operation. The two-stage procedure has been in use for decades and was regarded as the most effective treatment. There has been an increase in the use of the one-stage procedure as it has also been claimed to be very effective at treating infection. There has been a lot of controversy among orthopaedic surgeons as to which is the best way to treat infected hip replacements. Several studies have been conducted on the topic, but the findings have been inconsistent. Some claim the two-stage to be more effective and others claim the one-stage procedure is. Currently the majority of studies claim the two-stage is better; but no study has been conducted that compares these procedures head-to-head to decide if one is better or if they achieve the same results. Due to the lack of evidence, some surgeons are reluctant to use the one-stage strategy. There was therefore a need to compare the effectiveness of the two surgical strategies using an appropriate study design.

We conducted a study which involved collecting and bringing all previous data together under one umbrella. The process is known as “Individual Participant Data meta-analysis”. It involved communicating with surgeons in different countries all over the world and inviting them to contribute data. We called the name of the group “The Global Infection Orthopaedic Management (INFORM) Collaboration”.

Response: Altogether we collected data from 44 studies which involved 1856 patients with infected hip replacements. Our results showed that the one-stage revision strategy for treating an infected hip replacement is as effective as the two-stage strategy if not better. The one-stage strategy may also be a suitable procedure for patients with certain types of infection or problems that were previously thought not to be appropriate for this type of surgery.

Response: The findings have wide implications for patients, orthopaedic surgery, the NHS, and healthcare systems worldwide. For several decades, the commonly used two-stage procedure has been presumed to be more effective than the one-stage procedure. However, it has disadvantages for patients, the surgeon, and the healthcare system – such as having two major surgical procedures, significant pain and limited function between stages, prolonged hospitalisation, as well as associated with high healthcare costs. The one-stage strategy is less commonly used because of limited evidence on its effectiveness. It however has potential advantages which include having only one major surgery, shorter overall stay in the hospital, reduced functional impairment, and is less expensive. With these new findings and subsequent adoption of the one-stage strategy by surgeons and hospitals, quality of life could be improved, unnecessary deaths averted, and this could all be achieved at a lower cost.

Response: The current findings are based on observational evidence. Ideally, to compare which is the better of the two strategies in treating infection, it will require robust evidence from a clinical trial. However, this is very difficult to conduct as it will require several thousands of patients with infections of the hip. Our research team is currently undertaking a trial which is comparing the two surgical strategies using patient reported outcomes such as pain and function. It is hoped that this trial will determine which is the better of the two strategies to treat infected hip replacements when pain and function are considered to be the most important outcomes.