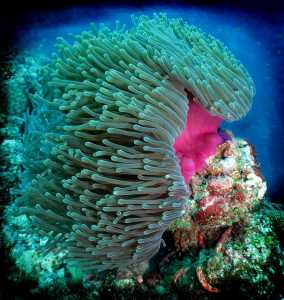 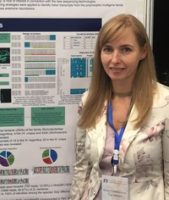 Elena Leychenko is a senior research associate at PIBOC (G.B. Elyakov Pacific Institute of Bioorganic Chemistry which is the Far Eastern Branch of the Russian Academy of Sciences), assistant professor, and lecturer at the chair of bioorganic chemistry and biotechnology of the School of Natural Sciences
Far Eastern Federal University

Response: Sea anemones are the main object for study in the laboratory for peptide chemistry of PIBOC. These marine dwellers are very interesting for scientists because of a wide range of biologically active compounds, which are the main components of their venom. The development of modern research methods allows us to receive both major and minor components of that poison, and to study their medical properties. Interestingly, inhibitors of Kunitz-type proteinases, which are also content in sea anemones, can be used as anti-inflammatory compounds. In particular, in complex therapy, it could be applied in the treatment of Alzheimer’s disease.

Response: Biological compounds to fight various serious diseases which therapy is difficult now, including oncology, had already been created by nature. Very often such compounds are found in marine organisms such as sea anemones, sea cucumbers, sea stars, sea urchins, as well as in marine bacteria and fungi. We are permanently looking out for new useful substances. The most interesting organisms are still hidden from us at a depth of more than one kilometer. Access to marine life at such level is still technically restricted. At the same time, these organisms contain the strongest antibiotics and new chemical compoundsnot yet studied.

Response: First thing, it is necessary to study the mechanism of action of the new peptide and to understand how exactly it blocks proteinases or receptors. Then we need to conduct preclinical and clinical trials. If the necessary funding for such research is provided, then in term of three-five years, we will create the new generation of medical drugs. These drugs will help in the fight against many diseases which progression caused by an inflammatory process and neurons destruction.

Response: Applying modern research methods, we obtain a set of biologically active compounds of marine origin. Recently, we studied in detail the poison’s composition of another sea anemones – Heteractis crispa, akin to Heteractis magnifica. Thus, we found the compounds that can cope with not only the symptoms of Alzheimer’s but also Parkinson’s disease, as well as compounds with anti-cancer activity.

Importantly, that students and young scientists from the Far Eastern Federal University take an active part in these studies. This new generation in science possesses inquisitive minds and right ambitions. Using the capabilities of modern laboratories, these fellows achieve results and get motivated. Involving them in the orbit of science, we can talk not only about the present time discoveries but also about our future potential in the field of research and development of new types of medical drugs.