Posted at 11:38h in Abuse and Neglect by Marie Benz MD FAAD 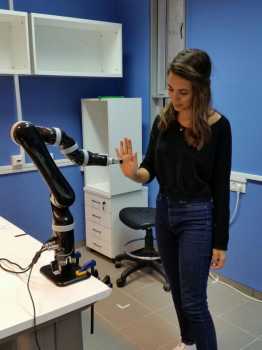 Ben-Gurion University of the Negev student researcher Shir Kashi interacts with robotic arm as part of her research in personalizing human-robot interactions to develop an interactive movement protocol for rehabilitation.

Response: Following brain injury, patients who need to practice their physical therapy exercises at home. Many don’t practice enough or at all at home, and so we are designing robot companions to encourage them to practice and to track their progress. This study is a first step towards this goal. Here, we studied how people played a leader-follower mirror game with a robotic arm, where a person and robot took turns following each other’s joint movements patterns. When the robotic arm was leading, it performed movements that were either sharp, like dribbling a ball, or smooth, like tracing a circle.

The study yielded three main conclusions. First, robotic movement primes the human movement. That is, the person tends to imitate the movements of the robot. This is a very important aspect to consider, for example, when designing a robotic nurse who assists a surgeon in the operating room. You wouldn’t want a robotic nurse to make sharp “robotic” movements that will affect the way the surgeon moves her hands during an operation.

Second, there was no clear-cut preference for leading or following the robot. Half the group preferred to lead the human-robot joint movement while half preferred to follow.

This finding highlights the importance of developing personalized human-robot interactions. Just as the field of medicine is moving towards customized medicine for each patient, the field of robotics needs to customize the pattern of interaction differently for each user.

Thus, determining the elements in the interaction that make users more motivated to continue it is important in designing future robots that will interact with humans on a daily basis.

Response: People tend to imitate the robot’s movement . This makes it a very important design feature in all human-robot interactions – and this finding goes well beyond the field of “robotics in rehabilitation”, and includes robotics in industry, agriculture and more: it is important to consider what movements we would want the person interacting with the robot to make, and design the robot’s movements accordingly.

Every person has a different set of preferences when interacting with a robot, and so we should develop personalized human-robot interactions. Just as the field of medicine is moving towards customized medicine for each patient, the field of robotics needs to customize the pattern of interaction differently for each user.

Response: The initial research by Shir Kashi won a “best poster award” at the Human-Robot Interaction (HRI) Conference in Vienna this March. This study was a continuation of that research.

The study was funded by the Leir Foundation, Bronfman Foundation, Promobilia Foundation, The Israeli Science Foundation (grants # 535/16 and 2166/16). Additional funding was provided by the Helmsley Charitable Trust through the Agricultural, Biological and Cognitive Robotics Initiative and by the BGU Marcus Endowment Fund.