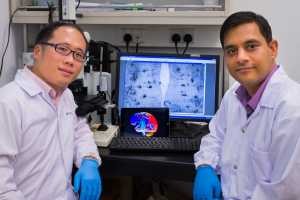 Response: To date, pharmacological treatments for dementia have limited effects (most of the drugs failed in the second or third clinical trials) and there are no known treatments that cure or delay the progression of this memory impairment. Therefore, a novel non-pharmacological approach such as deep brain stimulation (DBS) is currently considered as an alternative treatment to reduce the symptomatic and progression of this memory deterioration.

Response: My simple answer would be the title of our research paper in eLife http://elifesciences.org/content/4/e04803 deep brain stimulation of the prefrontal cortex enhances memory by a mechanism of neurogenesis in the hippocampus, a brain region involved not only for emotion, but also memory and learning behaviours.

Response: Our research can be seen as a first critical step towards the potential application of deep brain stimulation in patients with Alzheimer’s disease and aged-related dementia. The next challenge is to use this derive target structure (Prefrontal Cortex) for clinical DBS application (trials) in diseases characterized by dementia. Our present findings will be crucial for accelerating and validating clinical application of deep brain stimulation, which is likely to provide more rapid and robust therapies for this debilitating disorder. Furthermore, there is a foreseeable possibility of identifying novel mechanisms of brain function that would facilitate the investigation and management of patients with severe neurodegenerative disorders. If deep brain stimulation is effective in symptom-reduction in dementia, then it could be a major breakthrough for patients, families, and caregivers. We estimate that this would take approximately 1-2 year(s) in order to see the treatment result for patients with dementia.