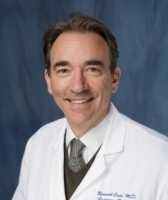 Dr. Cusi: Many patients with prediabetes or Type 2 Diabetes Mellitus (T2DM) are not diagnosed with Nonalcoholic steatohepatitis (NASH), a disease that is the second cause of liver transplantation in the United States. It is also associated with worse cardiovascular disease and harder to control T2DM. We had done in this population a proof-of-concept study published in Nov 2006 in the NEJM. But we lacked a larger, long-term study for definitive proof. This is the largest SINGLE center study, and the longest ever (3 years).

NASH is an overlooked problem for perhaps as many as one-third of patients with Type 2 Diabetes Mellitus. There is now a safe and effective treatment option for patients with T2DM and NASH – pioglitazone will become for NASH what metformin is to the treatment of T2DM: a safe, effective, the “backbone therapy” to which other treatments will be added.

Dr. Cusi:
1. That there is now a safe and effective treatment option for patients with Type 2 Diabetes Mellitus and nonalcoholic steatohepatitis – an overlooked problem for perhaps as many as one-third of patients with T2DM.
2. The large treatment effect (see Table 2 of paper and easier Appendix Figure 2). This is better than any novel therapies in the pipeline for NASH. The best coming options (i.e., obetacholic acid in FLINT; elafibranor in GOLDEN) have a resolution of NASH (FDA’s bottom line liver endpoint moving forward) of ~10% compared to 32% with pioglitazone
3. The persistence of benefit with long-term treatment (or at least 3 years, the longest published to date for any treatment in NASH).
4. That it was very safe and well tolerated over the entire study – without major weight gain 3 kg over 3 years, similar or less than if insulin is added to such patients with T2DM.

Dr. Cusi:  To become aware of the health risks associated with having a fatty liver, especially steatohepatitis (NASH), and to introduce a change in how they practice medicine: physicians should be encouraged to diagnose NASH early as there is more than lifestyle intervention to offer, and treat them with a drug (pioglitazone) that has a 15-year track record of use in the United States. Fear of bladder cancer was removed last year with a 10-year prospective study in a large population (see Lewis et al, JAMA August 2015).

However, doctors still fear this class (thiazolidinediones) based on the perception of cardiovascular risk left with the “rosigitazone fiasco”, but both drugs are very different. However, in the end, rosiglitazone was not associated with increased cardiovascular, as per the FDA’s final verdict in 2014. Also of note, rosiglitazone does not improve NASH (Ratziu et al, Gastroenterology 2008 or so). The pros/cons of thiazolidinediones are summarized in the Yau et al review from 2013, but published before the Lewis et al, JAMA August 2015.

MedicalResearch.com: Are there other points you would like to make?

Dr. Cusi: Physicians should learn more about the health risks associated with nonalcoholic steatohepatitis and treat it. Nonalcoholic steatohepatitis is the second cause of liver transplantation in the United States, more that alcohol abuse. The combination of pioglitazone’s efficacy, safety and low cost (see below) should put a new awareness on the disease and the potential to prevent cirrhosis in many patients.

With pioglitazone being a generic and cheaper option for diabetes than most medications (other than metformin or sulfonyureas) moving forward it should be second-line therapy for many patients. For instance, at Veterans Administration Medical Centers treatment with the maximal dose used in the study (45 mg/day) costs 10 cents (3 dollars a month). This opens the possibility for widespread use, again, if no contraindications.

MedicalResearch.com: Where should pioglitazone fit in the management of patients like these? Should it be used before or replace other anti-diabetic medications?

Dr. Cusi:
1. Metformin is the unquestionable first-line therapy for Type 2 Diabetes Mellitus: It is cheap, has 60 years of experience/time-tested, and is overall safe.
2. In patients with T2DM, pioglitazone would be the next drug of choice AFTER metformin for patients who have a fatty liver (about 70%), especially if they have NASH (about 30%, at least, but no great prevalence studies. Of course, not if you have contraindications such as heart failure, or females with osteoporosis.
3. In patients with pre-diabetes, pioglitazone prevents the progression to T2DM by ~70% (see RA DeFronzo et el, NEJM 2011; ACT NOW study); it also reduces cardiovascular disease. However, the drug is not FDA-approved in non-diabetics.

This video explains in 3 minutes the clinical implications of the paper: see the link below: https://www.dropbox.com/s/c2h5zdbp22b57hk/Dr.%20Kenneth%20Cusi%20.mp4?dl=0?

2. Role of Obesity and Lipotoxicity in the Development of Nonalcoholic Steatohepatitis: Pathophysiology and Clinical Implications
KENNETH CUSI
GASTROENTEROLOGY 2012;142:711–725