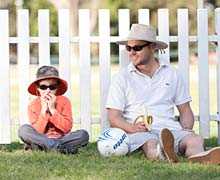 Dr. Dobbinson: Australia has one of the highest skin cancer rates in the world due to the country’s high levels of ultraviolet (UV) radiation and a population with susceptible skin types. Two in three Australians will be diagnosed with skin cancer by the age of 70, with more than 40,000 new cases annually in the state of Victoria alone.

Since the 1980s there have been broad public education programs to raise awareness of skin cancer. Television campaigns have been central to these multi-component prevention programs, including SunSmart, which is the longest-running program in Victoria.

This study examined SunSmart television advertisements broadcast over summers between 1987 to 2011 to determine what effect – if any – these advertisements had on people’s sun protection attitudes and behaviours.

Cross-sectional weekly telephone surveys of Melbourne residents were conducted over summers during the study period. Population exposure to campaign TV advertisements was also measured as cumulated weekly target audience rating points (TARPs) for 4 weeks prior to interview. Using multiple logistic and linear regression models, we examined whether there was a relationship between the TARPs and responses of the surveys.

We found that increasing TARPs were related to an increased preference for no tan, increased sunscreen use and overall reduced mean percentage of skin exposed to the sun. Also of note was that this behavioural impact was consistent across all age groups.

Dr. Dobbinson: The study shows that after more than two decades of exposure to SunSmart television advertising these campaigns have not yet reached a saturation point, and continue to have a strong impact on improving people’s sun protection behaviours. These effects were seen population-wide despite the campaigns being largely developed for a youth audience. Thus delivery of SunSmart messages in a timely manner during summer months can provide important prompts for sun protection behaviours among both adolescents and adults.

Given the long-term already significant public health burden of skin cancer in Australia, this study highlights the potential benefits of advertising campaigns in contributing to population-wide reductions in skin cancer incidence.

Dr. Dobbinson: A number of areas for future research are of interest. We would like to examine the effects of campaign advertising exposure alongside measures of potentially competing sun-related messages, such as news stories on vitamin D.

Secondly, we would also like to better understand the relationship between change in sun protection behaviours and sunburn outcomes, given this study found no benefits for sunburn outcomes, despite the improvements in sunscreen use and reduced body exposure.

Finally, to fully ascertain the cost-effectiveness of mass media campaigns, we would like to examine their impact compared to other media, policy and environmental approaches.

Continued Impact of SunSmart Advertising on Youth and Adults’ Behaviors