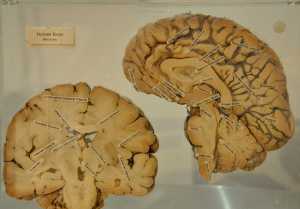 Dr. Haussler:  Researchers specializing in this area are interested understanding which evolutionary changes in our genome underlie human-specific brain features including our large (3X greater than chimpanzee) brain.

It has been my personal dream to peer into human evolution at the level of individual genes and gene functions.

2. They are expressed in the neural stem cells of the developing cerebral cortex and encode secreted notch-related proteins that can activate notch signaling, which is essential to the self renewal and proliferation of this critical cell type.

Dr. Salama: NOTCH2NL genes are a set of three nearly identical genes found only in humans that appear to play a critical role in the development of our large brains. They can activate Notch pathway signaling, which is important for regulating the balance between cortical neural stem cell self-renewal and differentiation. Increased levels of NOTCH2NL lead to more neural stem cells and decreased levels of NOTCH2NL to less.

The original Cell publication is available for anyone to access here: https://authors.elsevier.com/a/1X8ZRL7PXUgrM

Bonus content is available with the pre-press article here: