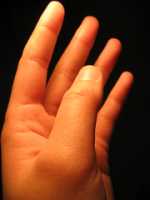 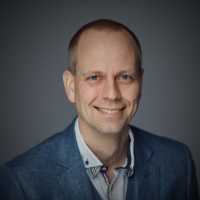 Response: We knew that there was a genetic component to handedness. Twin studies estimated that around 25% of the variation in handedness seen in the human population is down to genetic factors. Genetic factors associated with left handedness had been shown in specific patient populations, but this study has found factors in the general population and correlated them with functional brain imaging to shed more light on this fascinating subject.

We have used both genetic and imaging data from the UK Biobank study to discover genetic variants that are related to left handedness. We have correlated these variants with changes in brain imaging, in particular showing increased functional connectivity between the language processing areas of the brain in left handers. The genetic variants that are associated with left handedness are also near to genes involved in forming the internal skeleton of neurons, and important in brain development, suggesting that being left handed is in part caused by a difference in brain development. It is clear, however, that there are also many non-genetic influences on whether a person is left handed or not. In addition, we confirmed previous observations that being left handed is associated with other neurological problems, such as schizophrenia, and protective of others, such as Parkinson’s disease, and showed that this is related to shared genetic factors, and likely reflects differences in brain development.

Response: From the brain imaging study, we can see in the brain the effect of the variants in the genes that are associated with handedness: these effects are in the white matter, these fibres that connect the neurons, and specifically in the white matter tracts that connect the regions of the brain dedicated to language. when looking directly for differences in the brain between left- and right-handed people, what we see is that the left and right sides of the brain communicate in a more coordinated way in the left-handed participants of the UK Biobank (a higher synchronization of the natural oscillations of your brain) precisely again in the brain regions dedicated to language.

Response: The genetic and non-genetic basis of left-handedness is complex, and we have begun to unravel this story. We have shown that genetic variants pre-disposing to left handedness affect the structure and functioning of the brain, in particular the connections between the language processing areas of the brain.

Response: These results relate to the UK population only. It would be interesting to confirm them in even larger samples from around the world, and to see if there are differences seen in other populations. We also need to assess whether this higher coordination of the language areas between left and ride side of the brain in the left-handers actually give them an advantage at verbal ability. For this, we need to do a study that also has in-depth and detailed verbal ability testing.