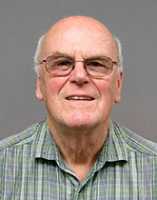 Response: My background in placental biology and in communication between the embryo and the mother in early pregnancy made me curious about how the zika virus (ZIKV) crossed the placenta in early pregnancy to cause microcephaly. My group had been working on a laboratory model for placental trophoblast for over 10 years. We generate trophoblast from human pluripotent cells (embryonic stem cells and induced pluripotent stem cells) by exposing them to the growth factor BMP4 and two pharmaceuticals that inhibit the signaling pathways necessary to maintain pluripotency. I was curious to determine whether or not ZIKV could infect these cells, replicate, and release infectious virus, because work from my collaborator Yoel Sadovsky at the University of Pittsburgh indicated that the mature placenta was likely to be resistant to infection.

Response: There are, I believe two striking outcomes from this work.

One is that the results indicate that the human placenta is likely most vulnerable to infection by Zika during the first trimester. We also suggest that women whose fetus is affected from an infection occurring later in pregnancy likely had a past dengue infection. The second striking result is that the African strain of Zika may have greater virulence towards early placenta than the Asian strains, such as the ones that have spread in the New World.

The work with the virus only began when we realized that term trophoblasts lacked expression of the genes that encode the protein factors that promote flavivirus infection (ZIKV is a flavivirus, like dengue, West Nile virus), e.g. TYRO3, AXL, MERTK, and also had a poised innate immune system that would counteract virus replication. Conversely, the trophoblasts we create from embryonic stem cells had the factors that would promote virus uptake, but seemed ill-prepared to counteract virus replication once infection occurred. In other words, the early placental trophoblasts were potentially more susceptible to infection. We confirmed this hypothesis with two strains of ZIKV (an Asian strain related to the one encountered in Brazil, and an African strain often considered to be relatively benign). What was unexpected was the African strain appeared to be more virulent than the Asian strain.

Response: Whether the early placenta could be protected by some sort of immune therapy or by prior vaccination of the mother is clearly uncertain at present. Vaccination programs have not been altogether successful when used to protect against Dengue, which is a virus related to ZIKV.

There is evidence that the early placenta is also permissive to other viruses, such as Rubella. Also there is a very interesting paper in the Journal of the American medical Association by Honein et al. that was published on December 15, 2016. In this study, the overall risk for microcephaly and other brain abnormalities in infants born to a large cohort of U.S. women exposed to ZIKV while traveling (n = 442) was 5.9 % (18), and, of these, there were no cases noted among the women known to have been infected during their second or third trimesters. In Brazil, women appear to be at risk for fetal infections by ZIKV throughout their pregnancies but this may be because they had experienced an earlier infection by Dengue. I have discussed this puzzle in the paper.

I have no disclosures to make, nor conflicts of interest regarding the research or this response to your queries.