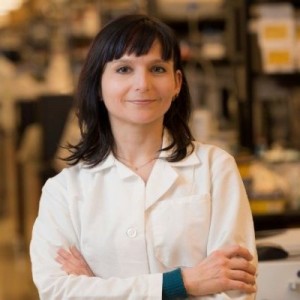 Dr. Suberbielle: BRCA1 is a key protein involved in DNA repair, and mutations that impair its function increase the risk for breast and ovarian cancer. Research into DNA repair mechanisms in dividing cells recently was recently rewarded by the Nobel Prize in Chemistry. In such cells, BRCA1 helps repair a type of DNA damage known as double-strand breaks that can occur when cells are injured. In neurons, though, such breaks can occur even under normal circumstances, for example, after increased brain activity, as shown by the team of Gladstone scientists in an earlier study. The researchers speculated that in brain cells, cycles of DNA damage and repair facilitate learning and memory, whereas an imbalance between damage and repair disrupts these functions.

Dr. Suberbielle In a new study published in Nature Communications, Researchers from the Gladstone Institutes demonstrates that Alzheimer’s disease is associated with a depletion of BRCA1 in neurons and that BRCA1 depletion can cause cognitive deficits.

The researchers experimentally reduced BRCA1 levels in the neurons of mice. Reduction of the DNA repair factor led to an accumulation of DNA damage and to neuronal shrinkage. It also caused learning and memory deficits. Because Alzheimer’s disease is associated with similar neuronal and cognitive problems, the scientists wondered whether they might be mediated by depletion of BRCA1. They therefore analyzed neuronal BRCA1 levels in post-mortem brains of Alzheimer’s patients.

Compared with non-demented controls, neuronal BRCA1 levels in the patients were reduced by 65-75%. To determine the causes of this depletion, the investigators treated neurons grown in cell culture with amyloid-beta proteins, which accumulate in Alzheimer brains. These proteins depleted BRCA1 in the cultured neurons, suggesting that they may be an important cause of the faulty DNA repair seen in Alzheimer brains. Further supporting this conclusion, the researchers demonstrated that accumulation of amyloid-beta in the brains of mice also reduced neuronal BRCA1 levels. They are now testing whether increasing BRCA1 levels in these mouse models can prevent or reverse neurodegeneration and memory problems.

Dr. Suberbielle Our study is the first to demonstrate that BRCA1 is important for neuronal function in the adult brain. Our findings underline the need to further study its roles in the brain in health and disease. They also imply that preventing or counteracting BRCA1 depletion could be of therapeutic benefit in Alzheimer’s disease.