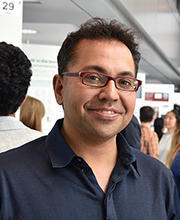 Response: Proteins abnormally accumulate in brain cells (neurons and glial cells) in all neurodegenerative diseases. In Parkinson’s disease and related disorders, the key protein that accumulates and aggregates is called “alpha-synuclein.” Presumably, when a protein like alpha-synuclein abnormally folds and aggregates, the abnormal form of the protein can become toxic to the neuron, eventually leading to cell death. Equally, the protein may no longer be able to carry out its normal function.

This begs the question – what does alpha synuclein actually do? Most evidence to date points to alpha-synuclein being involved in the transport of other proteins and chemicals around the cell, by closely associating with vesicles that are small circular containers enclosed by fat (“lipid) membranes. But alpha-synuclein is not just found associated with these vesicle membrane. It is found away from the membrane and it’s been unclear what it does there.

Response: We have found that the very same region of alpha-synuclein that binds to vesicle membranes has a “double life.” It enables alpha-synuclein to also binds to another group of proteins in the main “cytosolic” compartment of the cell (i.e. away from the membrane). Those proteins are part of a structure in the cytoplasm known as a “P-body.” There is thus a “toggle switch” in the cell – the more alpha-synuclein that is at the vesicle membrane, the less with the P-body. P-bodies are important structures – they regulate the decay of mRNAs (the intermediate between DNA and protein that regulate expression of our genes). It turns out that, when alpha-synuclein accumulates, the normal P-body protein complexes come apart and mRNAs in the cell abnormally accumulate. This happens in Parkinson brain, and also in Parkinson patient neurons made “in the dish” from induced pluripotent stem cells (iPSC).

Moreover, we found that mutations in the P-body genes may confer increased risk for Parkinson’s disease. Certainly, in simple model organisms in the lab, when we manipulate P-body genes we can dramatically alter the effects of alpha-synuclein toxicity. Thus, the regulation of P-bodies is not only an interesting new function for a very important protein – it may also be very important for understanding human disease.

Response: I think they should recognize that we know very little about the function of the toxic proteins associated with neurodegenerative disease. The function of these proteins may be critical to understanding the pathology that results after thee proteins accumulate and mislocalize in neurons.

Also, many therapies are targeting these toxic proteins – for instance, there are exciting approaches to reduce alpha-synuclein levels with drugs, gene therapies or antibodies. In order to understand the potential side effects of such therapies, we should know what the protein does. This paper may take us one step closer to that.

Disclosures: I am a scientific co-founder of Yumanity Therapeutics and Dacapo Brainscience, companies focused on CNS disease therapies. Yumanity employees contributed cell lines to this work.