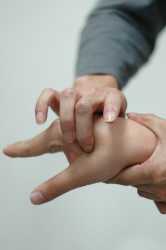 Response: Infantile colic is common, affecting 10-20% of newborns. These infants have intense crying and fussing, more than 3 hours/day more than 3 days/week. There is no medical treatment, causing desperate parents to seek complementary medicine. The evidence for acupuncture is sparse.

Group A received only one single needle for 2-5 seconds. Group B received up to five needle insertions for maximum 30 seconds. A third group, C, received no acupuncture. All families came to four extra visits to their Child Health Center where they met a nurse who gave advice and support. During these visits the infants were separated from their parents for five minutes, being alone with an acupuncturist who gave acupuncture to the infants in group A and B, but not to infants in group C. Parents and the nurse were blinded to which group the infant was randomized to.

Response: Infantile colic heals spontaneously but causes suffering in the infant and stress in the family while it lasts. Acupuncture may shorten this stressful period.
When parents experience excessive crying in their baby, the first important thing is to record the crying in a diary to evaluate the duration and intensity of the crying. Normal crying can be overestimated by tired and worried parents. If the baby cries more than three hours/day, a cow´s milk free diet should be tested as many infants with colic benefit from that. In our study only 157 out of 426 infants fulfilled the criteria for colic according to the diary after one week registration during which cow´s milk was eliminated. For those infants who still have colic, minimal acupuncture seems to be a safe and effective treatment.

Response: In both acupuncture groups the needle stimulation was “minimal”, i.e few needles were inserted, for only 1-3 mm and a few seconds, without further stimulation. As this very mild stimulation resulted in significant effect, minimal acupuncture should not be used as a placebo in acupuncture research.