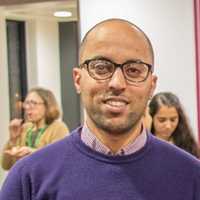 Response: Over the last decade or two, there has been many reports linking genetic mutations to the pathogenesis of Parkinson’s disease (PD). Among the proteins that have been found to be mutated in PD is a protein called PINK1. Indeed, PINK1 mutations that disturb its function in cells were found to be causal of PD in humans. Subsequent studies showed that PINK1 is a major player in maintaining healthy neurons. This is because it is one of the components involved in controlling the quality of the mitochondria, an organelle within the cell, and it does this by triggering the disposal of unhealthy mitochondria. Overall, studies into PINK1 indicated that the activation of PINK1 as a plausible strategy for maintaining health neurons and hence slowing down the development and progress of Parkinson’s disease.

Response: Working upon this hypothesis, we initiated a collaboration with Dr. Miratul Muqit, from the University of Dundee who is a world-leader in PINK1 biology, aimed at identifying synthetic molecules that could activate PINK1 and hence be promising agents to be developed into effective treatments for Parkinson’s disease. The focus was initially on looking into drugs that are already being used for the treatment many diseases and exploring if any of them could be re-purposed for PD. This has led us to identify Niclosamide a drug that has been used for over 50 years to treat tapeworm infection in humans. Our work shows that niclosamide is an effective activator of PINK1 in cells and in neurons.  This represents the first report of a clinically used drug as a potent activator of PINK1.

Response: A drug molecule called niclosamide, which is used to treat tapeworm infection, can activate an enzyme termed PINK1 and hence has the potential to maintain healthy neurons and possibly treat Parkinson’s disease. The work is still at its early stages, but this discovery is fundamental and odds a new dimension in the pursuit of new and effective treatments for Parkinson’s disease.

Response: Directly related to our work, studying niclosamide in PD models is required to establish its safety and efficacy. Beyond this, our work suggests that drug re-purposing initiatives maybe fruitful in discovering drugs for PD and other neurodegenerative diseases.