Response: Experimental work pioneered by Dr. Jared Grantham showed that cyclic AMP, an intracellular signaling molecule, promotes the development and growth of cysts. Vasopressin, a hormone produced by the pituitary gland, stimulates the production of cyclic AMP in the collecting ducts, from which most cysts derive in autosomal dominant polycystic kidney disease (ADPKD). While this effect of vasopressin is necessary for the kidneys to concentrate and reduce the volume of urine, it promotes the development and growth of cysts in patients with ADPKD. Dr. Vincent Gattone realized that inhibiting the action of vasopressin could be protective in polycystic kidney disease. Work in our and other laboratories confirmed that suppression of vasopressin production, release or action reduces cyst burden, protects kidney function, and prolongs survival in rodent models of the disease.

This experimental work provided a strong rationale for clinical trials of tolvaptan, a vasopressin V2 receptor antagonist. Tolvaptan reduced the rate of kidney growth in the TEMPO 3:4 trial, in patients with early ADPKD. It also reduced the rate of decline in kidney function, measured by the estimated glomerular filtration rate (eGFR), from 10.1 to 6.8 mL/min/1.73 m2 over three years. The eGFR benefit was maintained during two additional years when all the patients were treated with tolvaptan in an open label extension of the TEMPO 3:4 trial (TEMPO 4:4). Safety laboratory tests performed every four months showed elevations of liver transaminases in blood in 4.4% of tolvaptan and 1% of placebo-treated patients. Three of 1,271 tolvaptan-treated patients during TEMPO 3:4 and TEMPO 4:4 had evidence of potentially serious drug-induced liver injury. These abnormalities occurred all within the first 18 months of exposure to tolvaptan.

Based on the TEMPO 3:4 results, tolvaptan was approved for the treatment of rapidly progressive ADPKD in Japan, Canada, European Union, Switzerland and South Korea. In the United States, the Food and Drug Administration requested additional data to further evaluate the efficacy and safety of this drug. The REPRISE trial was performed to determine the efficacy and safety of tolvaptan in patients with later stage ADPKD. 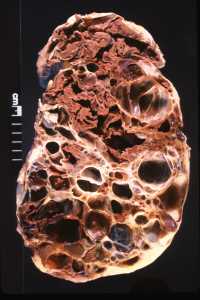 What are the main findings?

Response: The results of REPRISE in patients with later stage ADPKD, together with those of TEMPO 3:4 and TEMPO 4:4 over five years in early stage disease, show that tolvaptan is effective over a broad range of disease and may delay the need for dialysis or kidney transplantation.

Assuming that tolvaptan treatment would continue to slow the decrement in estimated eGFR by 1.27 mL/min/1.73 m2 per year, the time from an eGFR of 41 mL/min/1.73 m2 (average baseline eGFR in REPRISE) to CKD 5 (eGFR of mL/min/1.73 m2) would be extended from 6.2 years to 9.0 years. A larger benefit might be expected if treatment were started earlier.

Steering Committee chair for the TEMPO and REPRISE trials.