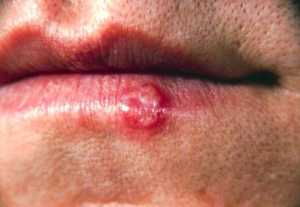 This photograph depicts a close-up of the lips of a patient with a herpes simplex lesion on the lower lip, due to the herpes simples virus-1 (HSV-1)
CDC image

Response: The background arises from the unexpected discovery, made by my lab almost 30 years ago, that the DNA of the common virus, herpes simplex virus type 1 (HSV1), known as the “cold sore” virus, was present in a high proportion of autopsy brains from elderly humans. Subsequently, we found that HSV1, when in brain of people who have a specific genetic factor, APOE-e4, confers a strong risk of developing Alzheimer’s disease. We found also a parallelism with cold sores in that APOE-e4 is a risk for the sores, which occur in about 25-40% of people infected with HSV1.

We then looked for links between the effects of HSV1 infection of cells in culture and AD, and found some major associations between virus and disease.

Firstly, HSV1 causes an increase in the formation of a small protein called beta amyloid, which is the main component of the abnormal “plaques” seen in Alzheimer’s Disease brains.

Secondly, we discovered that in AD brains, the viral DNA is located precisely within amyloid plaques, which suggests that the virus is responsible for the formation of these abnormal structures. Thirdly, we confirmed the finding of another lab that HSV1 causes the increased formation of an abnormal form of the protein known as tau, which is the main component of the other characteristic abnormality of Alzheimer’s Disease brains – “neurofibrillary tangles”.

All these discoveries suggested that the damage caused by HSV1 leads eventually to the development of AD.

Lastly, we showed that treating HSV1-infected cells in culture greatly reduces the formation of beta amyloid and abnormal tau. This suggests that antiviral agents might be used for treating Alzheimer’s Disease patients.

Response: The main findings of the three Taiwan studies were based on epidemiological data on the health and illnesses of the Taiwanese population; data were available for over 99% of the population.

Response: Professor Lathe and I, the authors of the commentary-report, wrote it to interpret the Taiwan data and to stress their importance in implicating HSV1 in Alzheimer’s Disease, and in showing that antivirals might successfully be used to combat the virus.

Response: I think it will be very important to carry out similar population-epidemiological studies in Europe and the USA, if sufficient long-term data are available. Another important issue is to find whether or not the other main microbes that have been implicated in Alzheimer’s Disease – two types of bacteria – act independently, or together, or in conjunction with HSV1 in brain, leading to the development of AD. This information would be essential for planning the types of antiviral and/ or antibacterial agents to be used for treatment.

Response: My only general comment is that it is gratifying to see the sudden interest now expressed by many workers in the field – interest which has been so rapidly conveyed to the media. This is especially intriguing in view of the many years endured by those working on microbes and AD, during which the concept was bitterly opposed, or derided – or completely ignored, causing extreme difficulties in obtaining carrying out the research and in publishing the results.