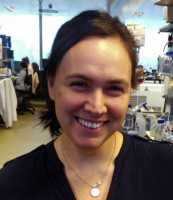 MedicalResearch.com Interview with: Marta Cortes Canteli, PhD Miguel Servet Research Fellow Centro Nacional de Investigaciones Cardiovasculares Carlos III (CNIC) Madrid, Spain MedicalResearch.com: What is the background for this study? Response: Alzheimer´s disease is the most common form of dementia affecting more than 30 million people worldwide. Research in recent years has linked the disease to a reduction in the cerebral circulation; this results in an insufficient supply of nutrients and oxygen to brain cells, leading to their death. Alzheimer disease is also known to be linked to an underlying chronic prothrombotic state. The present study combined physiological and molecular analyses to demonstrate that long-term anticoagulation effectively slows disease progression in a transgenic mouse model of Alzheimer disease. END_OF_DOCUMENT_TOKEN_TO_BE_REPLACED
Continue Reading
Author Interviews, JAMA, Urology / 03.10.2017

Hematuria, and Early Cancer Detection, Not Uncommon With Anticoagulation Medications

MedicalResearch.com Interview with: Robert Nam, MD, FRCSC Ajmera Family Chair in Urologic Oncology Professor of Surgery University of Toronto Head, Genitourinary Cancer Site Odette Cancer Centre Sunnybrook Health Sciences Centre  MedicalResearch.com: What is the background for this study? What are the main findings? Response: The well known potentially lethal complications of anti-thrombotic medications of cerebral and gastrointestinal bleeding complications are well known.  However, more common bleeding related complications are not well described .  In particular, gross hematuria is a well known complication of these medications but its frequency and severity is unknown.  We sought to characterize this association among a large population-based cohort consisting of over 2.5 million patients from the Province of Ontario, Canada, using hematuria-related complications was endpoints.  These were defined as undergoing invasive urologic procedures, hospital admissions or emergency visits for gross hematuria. END_OF_DOCUMENT_TOKEN_TO_BE_REPLACED
Continue Reading
Author Interviews, Stroke / 26.02.2017

MedicalResearch.com Interview with: Professor Philip Bath Stroke Association Professor of Stroke Medicine/Head of Division of Clinical Neuroscience Faculty of Medicine & Health Sciences University of Nottingham  MedicalResearch.com: What is the background for this study? What are the main findings? Response: Blood thinning (antiplatelets) drugs reduce further strokes (recurrence) after stroke and mini-stroke (TIA). One antiplatelet, such as aspirin, is better than none, and two different drugs are better than one. The question then is whether three would be better still, providing excess bleeding is not problematic. 3096 patients with ischaemic stroke (stroke due to a blood clot) or mini-stroke were enrolled within 48 hours. They were randomised to take intensive separate antiplatelet therapy (three drugs comprising aspirin, clopidogrel and dipyridamole) or guideline therapy (either clopidogrel alone, or combined aspirin and dipyridamole) for 30 days (after which they took guideline treatment). At 90 days we assessed whether patients had had another stroke or mini-stroke, and how dependent or disabled this had left them. There were slightly fewer recurrent strokes and mini-strokes between intensive and guideline treatment but the difference was not different statistically, so a neutral trial. In contrast, major bleeding was significantly increased in the intensive group as compared with guideline treatment. When looking at the net benefit/harm, there was no difference between the treatment groups. END_OF_DOCUMENT_TOKEN_TO_BE_REPLACED
Continue Reading
Author Interviews, Brigham & Women's - Harvard, Heart Disease, JACC, Surgical Research / 10.01.2017

MedicalResearch.com Interview with: Deepak L. Bhatt, MD, MPH, FACC, FAHA, FSCAI, FESC Executive Director of Interventional Cardiovascular Programs, Brigham and Women’s Hospital Heart & Vascular Center Professor of Medicine, Harvard Medical School Boston, MA 02115 MedicalResearch.com: What is the background for this study? What are the main findings? Response: Cangrelor is a potent, fast on, fast off, intravenous ADP receptor antagonist that is now available for use during PCI. Glycoprotein IIb/IIIa inhibitors are intravenous antiplatelet agents that work by a different mechanism. Doctors have asked whether there is any advantage to combining them or whether one class is preferable to the other during PCI. We analyzed close to 25,000 patients from the CHAMPION trials. Cangrelor’s efficacy in reducing peri-procedural ischemic complications in patients undergoing PCI was present irrespective of glycoprotein IIb/IIIa inhibitor administration. However, glycoprotein IIb/IIIa inhibitor use resulted in substantially higher bleeding rates, regardless of whether the patient was randomized to cangrelor or to clopidogrel. Thus, in general, cangrelor and glycoprotein IIb/IIIa inhibitors should not routinely be combined. If an operator wishes to use a potent intravenous antiplatelet during PCI, cangrelor is similarly efficacious as glycoprotein IIb/IIIa inhibitors, but with less bleeding risk. END_OF_DOCUMENT_TOKEN_TO_BE_REPLACED
Continue Reading
Author Interviews, Stroke / 04.03.2016