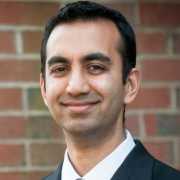 MedicalResearch.com Interview with: Samuel Hawley | Research Assistant (NIHR PhD Project) | Pharmaco- and Device Epidemiology Group | Centre for Statistics in Medicine | NDORMS | University of Oxford  MedicalResearch.com: What is the background for this study? What are the main findings? Response: The aim was to disentangle some of the potential reasons for the recent decline in joint replacement rates among rheumatoid arthritis (RA) patients in the developed world. The main findings from our UK patient-level analysis indicated that joint replacement rates were not significantly different for users of TNF inhibitors versus the patients who remained only on conventional synthetic DMARDS, however we did find that TNF inhibitor use amongst older RA patients was associated with a 40% reduction in hip replacement rates. END_OF_DOCUMENT_TOKEN_TO_BE_REPLACED
Continue Reading
Author Interviews, Orthopedics, Rheumatology, Social Issues / 07.11.2017

African Americans Do Worse After Joint Replacements, But Only In Disadvantaged Neighborhoods

MedicalResearch.com Interview with: Susan M. Goodman, MD Director of the Integrative Rheumatology and Orthopedics Center of Excellence Hospital for Special Surgery  MedicalResearch.com: What is the background for this study? What are the main findings? Response: We have previously reported that African Americans who have poorer health outcomes, may be disproportionately impacted by community factors. For African Americans undergoing knee replacement, no difference in pain and function was seen compared to whites in communities with little poverty, while in poor communities, African Americans had poorer outcomes. We wondered if this was generally true or if this only applied to knee replacements. We found similar results; African Americans in richer neighborhoods have comparable outcomes to whites, but as poverty increases- in this study measured as percent with Medicaid coverage- outcomes worsen in a step wise fashion. END_OF_DOCUMENT_TOKEN_TO_BE_REPLACED
Continue Reading
Author Interviews, General Medicine, Orthopedics / 15.03.2017

Men and Women Have Different Post-Op Risks After Joint Replacement

MedicalResearch.com Interview with: Darwin Chen, MD Assistant Professor, Orthopaedics Icahn School of Medicine at Mount Sinai MedicalResearch.com: What is the background for this study? Response: Total hip and knee replacement surgery are among the most commonly performed orthopaedic procedures today. Although success rates are high, complications can occur and some may be preventable. The goal of our research was to assess the impact of gender on complications within the first 30 days after hip and knee replacement. END_OF_DOCUMENT_TOKEN_TO_BE_REPLACED
Continue Reading
Author Interviews, BMJ, Orthopedics / 17.09.2014

MedicalResearch.com Interview with: Marc Nieuwenhuijse MD Research fellow ICOR and FDA Weill Cornell Medical College New York City   Medical Research: Why did you decide to study this topic? Dr. Nieuwenhuijse : The introduction of new orthopaedic implants and related technologies has been the focus of major scientific and policy discussions since the failures of articular surface replacement and large head size metal-on-metal articulations in total hip replacement were brought to light. However, scientists and policy makers seem to “run out of steam,” and the momentum for change generated by these recent high profile failures is waning. The consequences of uncontrolled device introduction worldwide may not be fully recognised by the scientific community and there is a high likelihood that current practice regarding device innovations will not change much. As such, there is a need to investigate whether the problems associated with the articular surface replacement and large head size metal-on-metal articulation are isolated events or if there is a systemic problem affecting the introduction of a much wider range of implantable devices. In this study, we systematically evaluate the evidence concerning the introduction of five substantial, innovative, relatively recent, and already widely implemented device technologies used in major total joint replacement to determine the evidence of effectiveness and safety for introduction of five recent and ostensibly high value implantable devices in major joint replacement to illustrate the need for change and inform guidance on evidence based introduction of new implants into healthcare. END_OF_DOCUMENT_TOKEN_TO_BE_REPLACED
Continue Reading
Heart Disease, Orthopedics / 16.03.2014

MedicalResearch.com Interview with: Bheeshma Ravi, MD Orthopedic Surgery University of Toronto Medical Center   MedicalResearch.com: What are the main findings of the study? Dr. Ravi:  This study suggests that in persons with moderate-severe osteoarthritis of the hip or knee, total joint replacement is associated with a significant reduction in the risks for serious cardiovascular events. END_OF_DOCUMENT_TOKEN_TO_BE_REPLACED
Continue Reading
Author Interviews, BMJ, Orthopedics / 26.01.2014