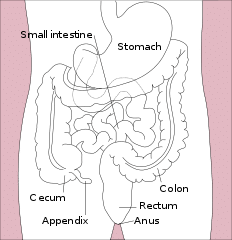 Response: We turned our attention to the vermiform appendix. This is a tissue that most people consider to be a useless organ, it’s attached to the large intestine, and its removed as a very common surgical practice.

So we embarked on a full study of the role of the appendix in Parkinson’s disease.

We are not saying that having an appendix causes Parkinson’s disease and that all people should go out and remove their appendix. What we are saying is that the appendix is a tissue site that contains a lot forms of alpha-synuclein that are associated with PD, even in healthy people.

But that location is everything. Alpha-synuclein aggregates are normal in the appendix, but in very rare instances, we think that if allow to escape and go to the brain could be disease causing. We think that what actually distinguishes a person that goes onto develop Parkinson’s from one that does not is not the presence of this pathology but rather the factors that trigger departure from the appendix, its spread to the brain and its neurotoxicity.

This brings new insight into the origins of the disease and could help improve future therapies for this devastating neurodegenerative disease.

Response: Next steps for physicians (and public):

Disclosure: Conflicts of interest are detailed in the paper.