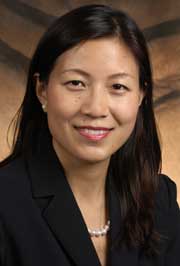 Dr. Wang: PAD is a major source of morbidity and mortality resulting in functional impairment, limb loss, as well as death. Despite epidemiologic studies which have contributed to our understanding of PAD prevalence and its association with traditional atherosclerotic risk factors, there have been conflicting studies published on the incidence of PAD and differences in treatment outcomes in women versus men. Patients with chronic kidney disease (CKD) are at particularly high risk for PAD. We set out to to define how the incidence of peripheral arterial disease (PAD) in chronic kidney disease (CKD) differs according to sex and age.

Dr. Wang: Females had a 1.53-fold greater adjusted PAD risk compared to men (95% CI 1.27-1.84, p<0.001). These sex-related differences in PAD risk differed by age (p=0.013). Women, compared to men, were at a markedly increased risk for PAD at younger ages; however, at ages greater than 70 years, the risk was similar across both sexes. Older men had a substantially greater PAD risk compared to younger men. In women, PAD risk did not vary with age.

Dr. Wang: Females have a higher risk of PAD overall compared to males. This increase in risk was greatest in the younger age groups, but by age 70, the risk was similar in women and men. This suggests that efforts should be made to detect PAD earlier in women.

Dr. Wang: Future studies should be devoted to understanding the impact of earlier detection of PAD in women and improving our understanding of the biological and clinical basis for these sex-based differences.