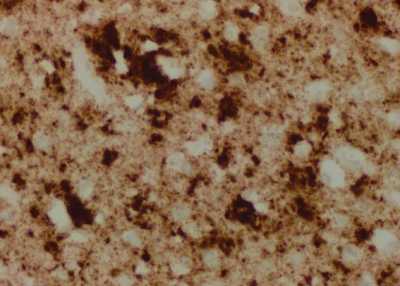 The brain of one patient who died from sporadic Creutzfeldt-Jacob disease (sCJD) appears nearly identical to the brain of a mouse inoculated with infectious prions taken from the skin of patients who died from sCJD.
Case Western Reserve University

MedicalResearch.com: Would you briefly explain what is meant by Creutzfeldt-Jakob disease?

Response: Creutzfeldt-Jakob disease (CJD) is an incurable—and ultimately fatal—transmissible, neurodegenerative disorder in the family of prion diseases. Prion diseases can be found in many mammalian species and are due to the conversion of normally harmless prion protein molecules into abnormally folded, aggregated and self-propagating clusters and filaments in the brain. The accumulation of these clusters has been associated with tissue damage that often leaves dying neurons and microscopic sponge-like holes in the brain. In the sporadic and genetic forms of CJD this pathogenic process appears to arise spontaneously in the patient.

However, the transfer of the prion protein aggregates from a Creutzfeldt-Jakob disease patient into another human or experimental animal can initiate the pathogenic process in the recipient. These infectious forms of prion protein are called prions. Human prion diseases include fatal insomnia; kuru; Gerstmann-Straussler-Scheinker syndrome; and variant, familial and sporadic CJD. Sporadic CJD is the most common human prion disease, affecting about one in one million people annually worldwide. Other prion diseases include scrapie in sheep; chronic wasting disease in deer, elk and moose; and bovine spongiform encephalopathy (BSE), or mad cow disease, in cattle.

Response: Although prions predominate in the central nervous system, they can also be found to varying degrees in other tissues.

We tested for prions in the skin of patients dying of Creutzfeldt-Jakob disease for two main reasons:

1) to explore skin’s utility as an accessible diagnostic specimen, and

2) to see if such prions might help explain tentative (and conflicting) reports of heightened risk of CJD associated with surgeries involving skin.

Using a novel and ultrasensitive test called RT-QuIC, we found prion seeding activity in all 23 CJD decedents (21 sporadic and 2 variant) and not in 15 non-Creutzfeldt-Jakob disease controls. Inoculation of skin extracts from 2 sporadic CJD cases into 12 transgenic “humanized” mice gave all of them prion disease. However, the levels of prion seeding activity in skin were orders of magnitude lower than that found in brain tissue.

Response: We have provided clear evidence of infectious prions within the skin of patients dying of Creutzfeldt-Jakob disease. These results suggest that the diagnosis of CJD might be possible using RT-QuIC analysis of skin specimens.

Whether the low levels of prions in the skin present an actual risk of transmission via medical procedures, for example, remains to be determined, presumably by more extensive and well-controlled epidemiological studies. However, in no way should our findings be taken as evidence that CJD can be transmitted between people via casual skin contact. We have tested only the full thickness of the skin, including the deepest innervated layers, and have no data on the outer layers alone.

Response: Much more extensive RT-QuIC analyses of the skin of prion disease cases and controls will be required to validate the diagnostic utility of skin testing, and to ascertain how early in the disease course that prion seeding activity becomes detectable in the skin of patients with various types of prion disease.

Further epidemiological analyses will be necessary to evaluate the practical risks, or lack thereof, posed by the presence of low levels of prions in the skin of Creutzfeldt-Jakob disease patients.

Disclosures: We have a patent pertaining to the RT-QuIC technology for detecting prions.