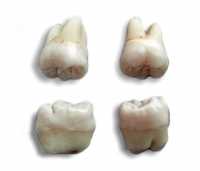 MedicalResearch.com Interview with: Hans Bisgaard, DMSc, MD Head of COPSAC, Professor Professor of Pediatrics, University of Copenhagen Founder and Head of the Copenhagen Prospective Studies on Asthma in Childhood; Gentofte Hospital, University of Copenhagen and Naestved Hospital MedicalResearch.com: What is the background for this study? Response: Enamel defects is a global health challenges affecting typically 1/3 of school children and more in some regions. It leads to break down of the teeth and caries later on. MedicalResearch.com: What are the main findings? Response: Supplementation with high-dose vitamin D compared to standard dose in the third pregnancy trimester in a mother child cohort of 588 pairs lead to a significant reduction of enamel defects. Enamel defects was found in 28% of children by age 6 after standard dose of vitamin D supplementation (400 i.u.), compared to 15% after 7-fold higher dose vitamin D. END_OF_DOCUMENT_TOKEN_TO_BE_REPLACED
Continue Reading
Author Interviews, BMJ, Endocrinology, Thyroid Disease / 25.02.2015

High Fluoride in Drinking Water May Be Linked To Hypothyroidism

MedicalResearch.com Interview with: Professor Stephen Peckham Director, Centre for Health Services Studies Professor of Health Policy Department of Health Services Research and Policy London School of Hygiene and Tropical Medicine Director, Policy Research Unit in Commissioning and the Healthcare System University of Kent   Medical Research: What is the background for this study? What are the main findings? Response: Community water fluoridation remains a controversial public health measure. There have been continued debates about both its effectiveness in the prevention of dental caries and also its safety. Previous studies have suggested that there is an association between fluoride ingestion and the incidence of hypothyroidism few population level studies have been undertaken. In April 2014 Public Health England published a monitoring report that used secondary analysis of routine health statistics to identify whether water fluoridation in England was associated with any adverse health outcomes. While hypothyroidism data is available this was not included in their monitoring report. In England approximately 10% of the population lives in areas with community fluoridation schemes and hypothyroidism prevalence can be assessed from general practice data. Tt examine whether there is a relationship – as suggested in smaller studies – we used a cross-sectional study design using secondary data to develop binary logistic regression models of predictive factors for hypothyroidism prevalence at practice level using 2012 data on fluoride levels in drinking water, 2012/13 Quality Outcomes Framework (QOF) diagnosed hypothyroidism prevalence data, 2013 General Practitioner (GP) registered patient numbers, and 2012 practice level Index of Multiple Deprivation scores. We found a positive association between fluoride levels and hypothyroidism. High hypothyroidism prevalence was found to be at least 30% more likely in practices located in areas with fluoride levels in excess of 0.3mg/L. This population study supports earlier hypotheses that fluoride is associated with hypothyroidism. In the UK water is fluoridated at 1ppm (1mg/L) and in areas where water is fluoridated the model predicts that after controlling for other factors, practice populations are significantly more likely to have higher levels of hypothyroidism than those in non-fluoridated areas. Higher levels of fluoride in drinking water, therefore, provide a useful contribution for predicting prevalence of hypothyroidism. For example in contrasting two urban areas we found that practices located in the West Midlands (a wholly fluoridated area) are nearly twice as likely to report high hypothyroidism prevalence in comparison to Greater Manchester (non-fluoridated area). END_OF_DOCUMENT_TOKEN_TO_BE_REPLACED
Continue Reading
Author Interviews, Dental Research, Sugar / 17.09.2014

Dietary Sugar Increases Dental Decay Even With Fluoride Use

MedicalResearch.com Interview with: Professor Aubrey Sheiham Emeritus Professor of Dental Public Health Department of Epidemiology & Public Health, University College London, WC1E 6BT. UK. Medical Research: What are the main findings of the study? Prof Sheiham: There is a robust log-linear relationship of caries to sugar intakes from zero to 10% of sugars as a proportion of total energy intake. Furthermore our analyses showed that sugar intakes of 10%E sugars intake that is currently recommended as an upper limit for free sugars by the WHO and the Scientific Advisory Committee on Nutrition in England would induce a very costly burden of caries in most populations. Second, we found that free sugars* in the diet should make up no more than 3% of total energy intake. Above that level they cause a significant level of tooth decay across the lifecourse of most people in the developed world. Third, we were able to show that despite widescale fluoride use from both toothpastes and drinking water the mean numbers of decayed, missing and filled teeth (DMFT) and decayed and filled surfaces (DFS) for adults increased with sugar use despite the presence of fluoride. *Free sugars are defined by the World Health Organisation Nutrition Guidance Adivisory Group as follows: “Free sugars include monosaccharides and disaccharides added to foods by the manufacturer, cook or consumer, and sugars naturally present in honey, syrups, fruit juices and fruit concentrates.” END_OF_DOCUMENT_TOKEN_TO_BE_REPLACED
Continue Reading