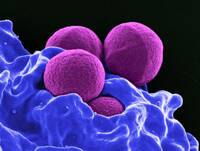 Response:  Staphylococcus aureus is one the of the most important causes of infectious diseases worldwide. It is known mostly for causing skin infections in the community and as a hospital-associated pathogen. It is in fact the most frequent cause of infections patients acquire in the hospital when they are weakened by underlying diseases or immune-suppressing therapy. The type of infections Staph can cause in these situations are diverse – comprising bone, lung, and blood infections (sepsis) – and can be quite severe and often fatal.

Except for moderately severe skin infections that may not require antibiotic treatment, treatment of Staph infections is by antibiotics. S. aureus has naturally been very responsive to penicillin-type antibiotics, but already in the mid of the last century, resistance to penicillin spread worldwide. Then, methicillin was invented to overcome this resistance, but nowadays there also is considerable spread of methicillin-resistant strains (MRSA).

The current situation is difficult for two reasons:

Researchers have therefore been searching for alternatives to antibiotics to treat Staph infections. Unfortunately, vaccines that work against Staph have not yet been produced despite intensive efforts for decades. Other modern approaches of treatment, like virulence-targeted drugs or phages are still only at the early investigational level.

As with many diseases, an alternative to treatment is prevention. In the case of S. aureus, a type of preventative strategy that has often been proposed and tested is decolonization. This is based on the fact that ~ 1/3 of the population is naturally colonized with S. aureus (asymptomatically), and these colonized people have an increased risk of being infected. In other words, Staph infections stem from the Staph you carry on your body and which only under certain conditions causes infection. Thus, eliminating the colonizing Staph would reduce the risk for infection, which is the basis for Staph decolonization-based infection prevention strategies.

MedicalResearch.com: Which type of probiotic was utilized in this study?

Response: By definition, probiotics are supplements containing live microorganisms. While they have gained much attention and are heavily marketed, the scientific basis or mechanism of their alleged benefit is not that clear. Furthermore, when you buy a “probiotic”, it is often an ill-defined mixture of many bacterial strains.

Our approach is categorically different. The probiotic strain we use, Bacillus subtilis, is very specific and the mechanism by which it works for our purpose, is also very specific and described by us in a paper in Nature published in 2018. So, we know exactly what is going on. Namely, Bacillus produces specific lipopeptides that inhibit the quorum-sensing system of S. aureus, which in turn we also showed is essential for S. aureus gut colonization.

The beauty of this approach is that we can specifically target the “bad” S. aureus while leaving the composition of the microbiome intact (the “good” bacteria we need for efficient digestion and as recent research has shown, many other things). This is because the targeted system is virtually only found in Staph. Notably, this specificity is much higher than that of other so-called “microbiome editing” approaches that are often based on bacteriocins, which despite some specificity still eliminate quite large groups of bacteria. It is the most specific “microbiome editing” approach that I am aware of.

I should emphasize, because this is often misunderstood, that this approach does not kill S. aureus – but it strongly diminishes its capacity to colonize the intestine.

Response:  While I had to explain a lot about the scientific background – and we are proud we have such a detailed scientific basis, the trial is very straightforward. We simply wanted to test whether we can use this mechanism to decrease S. aureus colonization in humans in a way we had shown previously in the lab in mice.

We gave healthy human volunteers Bacillus probiotic once daily for four weeks, and placebo to a control group, and checked after 4 weeks if there was an impact on S. aureus numbers in the intestine (as counted by analyzing feces). The effect was very strong: We could reduce S. aureus numbers by ~ 97%.

Response: First, there is of course the implication that this is a fantastic way to eliminate most of S. aureus colonization without doing any “harm” to the microbiome. In fact, B. subtilis probiotic even has other described beneficial effects.

Response: Looking forward, the next logical step would be to perform trials to see whether this approach can be used to reduce infection rates. We are currently trying to identify a patient cohort where our approach is deemed to be best applicable. The nature of our decolonization approach is long-term. In contrast to antibiotics, it may not work as fast, but it can be extended as it doesn’t cause harm. Thus, this will not work for a patient coming into a hospital who is undergoing surgery the next day. Patients that we are thinking of who could benefit from this approach include those with increased S. aureus infection risk in long-term care facilities or chronic and recurring S. aureus infections.

My current view of S. aureus colonization dynamics is that the intestinal colonization forms a big reservoir, while nasal colonization is secondary and needs occasional “re-inoculation” from the gut. However, the nose may be more important than the gut as a direct source for infection: via the respiratory tract or nose picking for wounds. That means for decolonization measures that a combination of (1) our probiotic to reduce overall and intestinal colonization long-term with (2) additional antibiotic/antiseptic-based eradication in the nose and on the skin is probably the best way to achieve a fast-acting but also more persistent prevention of infection.

Disclosures: There are no disclosures. This study was entirely financed by grants of our Thai collaborators in addition to the intramural program of the NIAID.