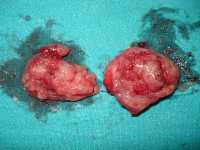 09 Nov Tonsillectomy Often Done When Not Indicated (and vice versa!)

A pair of tonsils after surgical removal
Wikipedia image

Response: Tonsillectomy is one of the most common childhood surgical procedures. There are two main indications: recurrent sore throat and sleep-related breathing problems (including obstructive sleep apnoea).

Jack Paradise’s 1984 study made clear tonsillectomy is modestly effective in children with frequent, severe sore throats: seven in one year, or five yearly in two successive years, or three yearly in three successive years. Sore throats must have symptoms: fever, pus seen on tonsils, lymphadenopathy or confirmed Streptococcal infection. With surgery, children average two sore throats in the next year, without surgery, three. Two years later there is no difference. Further research shows the benefits are too tiny to justify surgery in children with less frequent, less severe or undocumented sore throats. Subsequent randomised controlled trials have not changed the evidence. There isn’t enough good evidence to support surgery in children with obstructive sleep apnoea or sleep related breathing problems.

Tonsillectomy is not a trivial procedure, about 2% are readmitted with haemorrhage and about 1 in 40,000 dies. Childhood tonsillectomy is linked to risk of adult autoimmune diseases. It is important to be sure tonsillectomy is only undertaken in children where there are evidence-based indications.

Response: We looked at the medical records of 1.63 million UK children, between 2005 and 2016. We found 18,281 children who underwent tonsillectomy but only 2,144 (11.7%) had evidence-based indications. Most childhood tonsillectomies were for sore throats, but too few to justify surgery; 12.3% were for sleep disordered breathing;  3.9% were for obstructive sleep apnoea. The pattern of indications for tonsillectomy was similar to that reported by the Royal College of Surgeons of England.

At the same time we found 15,760 with evidence-based indications, meaning only 13.6% (2,144) underwent surgery.  We also found that of 15,205 children with sleep related breathing problems, only 14.8% underwent tonsillectomy and of 3,185 children with obstructive sleep apnoea, only 22.2%. There was little change over 12 years except for an increase in tonsillectomies for obstructive sleep apnoea.

Parents should be given accurate honest information on the benefits and hazards of tonsillectomy so they can make an informed decision. Parents can be reassured that the vast majority of children with frequent severe sore throats do not undergo tonsillectomy, therefore surgery is not essential.

Parents should be told that there is insufficient evidence surgery is effective for obstructive sleep apnoea or other sleep related breathing problems and can be reassured that the vast majority of children with either condition do not undergo tonsillectomy, therefore surgery is not essential.