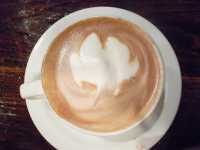 14 Nov Can Coffee Protect Against Alzheimer’s and Parkinson’s Disease?

Therefore, it was logical for us to look at extracts of coffee. We see similarities between maple syrup and coffee. In both of these natural products, the plant derived material (i.e. the coffee bean, or sap from maple syrup) is initially boiled or roasted prior to its use; thus, it is not a direct simple plant product, but one that has been heated (boiled or roasted). We suspect that the heating process “does more chemistry” enabling the generation of new molecules from the plant derived materials. In our study we show that a class of compounds (phenylindanes) from roasted coffee has the ability to inhibit the misfolding of two proteins (beta-amyloid, tau) whose misfolding and aggregation (“clumping”) is implicated in the disease process of AD.

Second, as described below, there is already epidemiological evidence that coffee consumption may offer some protective effects against Alzheimer’s disease and Parkinson’s disease (PD), so by looking at the constituents of coffee for chemicals that might block the clumping of beta-amyloid and/or tau, was an attempt to seek a molecular link explaining the epidemiology.

MedicalResearch.com How does this study build on the current epidemiological evidence about the link between coffee and Alzheimer’s disease?

Response: Epidemiological evidence suggests that coffee consumption may offer some protection against the development of Alzheimer’s disease and Parkinson’s disease. It’s hard to know exactly what effects coffee will have on you, but there are facts that you can view on The Full Moon Cafe about coffee that may be worth checking out if you want to learn more. Alzheimer’s disease and PD are both neurodegenerative diseases, which share a similarity. The similarity is that they are both regarded as protein misfolding diseases. In AD, the two proteins that misfold are beta-amyloid and tau; in PD the protein that misfolding is alpha-synuclein. Accordingly, we sought to connect the epidemiological observation that coffee is protective, by examining the chemical components of coffee for chemical(s) that prevent protein misfolding. As mentioned above, we identified phenylindanes as agents which prevent the misfolding and clumping of beta-amyloid and tau. Therefore, there is a possibility that natural products such as phenylindanes are the explanatory link explaining the epidemiologically identified relationship between coffee consumption and AD/PD. However, this is only a suggestion. More work (see next question) is required before one can categorically state that this is indeed the explanation.

Response: This is just a start. Are phenylindanes the ingredient in coffee that explains coffee’s protective effect? Too early to say! There is much that needs to be studied. Can phenylindanes actually get into the brain when swallowed in a cup of coffee? That question remains unanswered. If they don’t have the ability to cross the blood-brain barrier (BBB) and get into brain, then clearly they are not the explanation. Also, could phenylindanes alone be the answer? Or, is it really a mixture of multiple chemicals within coffee that exerts the therapeutic effect? This requires further study.

MedicalResearch.com: How significant is it for potential future therapies, that the compound identified is natural vs. synthetic?

Response: All drugs are molecules, but not all molecules are drugs. Natural products have the interesting advantage that they sometimes exhibit structural complexities that Mother Nature is capable of making, but which would be rather challenging and expensive for a chemist to make in a laboratory. On the other hand, many of these natural products are so complex that these interesting structural features actually precludes them from crossing the BBB and entering the brain. Overall, we don’t think that the phenylindane extract will be a drug, but it might be an interesting and powerful starting point in the design and development of future drugs.

Response: Alzheimer’s disease is an impending pandemic. As the world’s population increases, the socioeconomic impact of Alzheimer’s Disease will be truly immense and will have grave consequences on our health care systems. We desperately need a disease modifying drug for AD. Currently there are NO disease modifying agents for AD. The drugs which are available are merely “symptomatic” agents of limited usefulness, which really do not alter the natural history of the disease and which are definitely not curative. We must leave no stone unturned in our quest to find a cure for AD. Given the long history of therapeutics emerging from natural product sources, studying agents derived from coffee is a reasonable avenue to pursue.