18 Mar Main Cause of US Lifespan Stagnation Not Opioids

Response: Life expectancy in the U.S. increased at a phenomenal pace throughout the twentieth century, by nearly two years per decade. After 2010, however, U.S. life expectancy growth stalled and has most recently been declining. A critical question for American health policy is how to return U.S. life expectancy to its pre-2010 growth rate. Researchers and policy makers have focused on rising drug-related deaths in their search for the explanations for the stalling and declining life expectancy.

Response: Our new study shows that a stagnating decline in cardiovascular disease (CVD) mortality was the main culprit for the end of life expectancy improvements, outpacing and overshadowing the effects of all other causes of death. Comparisons with other high-income countries reveal that the U.S. CVD stagnation is unusually strong, contributing to a stark mortality divergence between the U.S. and peer nations. 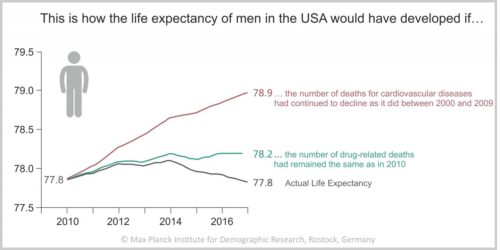 CAPTION
The figure displays the results of a simulation that examines the size of the influence of each of the two causes of death. The simulation shows how the life expectancy of 25-year-old American men would have developed between 2010 and 2017 if the number of drug-related deaths had remained constant, and how it would have developed if the number of deaths from cardiovascular diseases had declined to the same extent as it did between 2000 and 2009. (The simulation calculates the remaining life expectancy of 25-year-olds; in the figure, these 25 years are added to the total life expectancy.)
CREDIT:  MPIDR

Uncovering the reasons behind stalling CVD mortality should be a research priority. Rising obesity is a worthy candidate. The U.S. obesity epidemic started in the mid-1980s, ahead of other high-income countries. Recent cohorts have experienced obesity at a younger age than their predecessors. Moreover, the U.S. has a higher prevalence of diabetes compared to its peer countries. The timing of the cigarette smoking epidemic and particularly its recession may also be important. The U.S. was a leader in both the rise and fall of the smoking epidemic and the U.S. may have already benefitted from most of the gains from declining smoking. European countries, in contrast, may still be enjoying robust mortality benefits from their more recent declines.