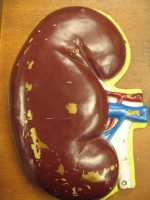 Response: The past research literature has provided relatively little information on the appropriate level of concern regarding non-steroidal anti-inflammatory drugs (NSAIDs) and kidney disease risk among younger, apparently healthy patients. Clinicians are generally most concerned about the effects of these medications on the kidneys among patients with existing renal impairment and persons at risk for it, especially older patients.

Given that NSAID use appears to be high and rising in the US, we were interested in developing evidence on this topic in a population of working-age adults.

Response: In this retrospective cohort study of 764,228 individuals serving in the US Army, we discovered that receiving a mean of greater than seven defined daily doses of NSAIDs per month was associated with modest but statistically-significant increases in the adjusted hazard of both acute kidney injury and chronic kidney disease, when compared to persons with no observed NSAID use.

Lower NSAID exposure was not associated with statistically-significant hazard increases in this population.

Response: The findings are important because they suggest that lowering the volume of NSAID exposure could help reduce the kidney disease burden in working-age adults.

Response: We would like to conduct or see analyses of large civilian populations using very similar methods to those we employed in studying this military population in order to determine whether the associations we observed vary among such groups.

Response: The statements made here are solely those of the research team at the Stanford University School of Medicine, and do not represent the position of the United States Army or the United States government.