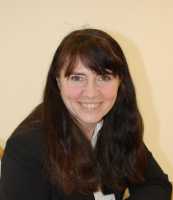 MedicalResearch.com Interview with: Beatrice Golomb, MD, PhD Director of the Golomb Research Group Professor of Medicine University of California, San DiegoResponse: MedicalResearch.com: What is the background for this study? How was the radiation emitted? Response: Possibilities include surveillance devices (or things to jam them), electronic weapons, or, less likely, “innocent” communications devices. MedicalResearch.com: What are the main findings? Response: That all key features of diplomats’ experiences comport with pulsed radiofrequency/ microwave (RF/MW) radiation. Reports of symptoms with RF/MW exposures date at least to the 1920s, affecting radio amateurs and shipboard radio operators as well as others working with radar or microwaves in occupational settings. By 1971/72, a Naval report with over 2300 citations (many from Russia and Eastern Europe), assessing effects of low intensity RF radiation, had whole sections devoted to each of a number of the symptoms diplomats report. Affected persons are a minority (in both settings), and in the nondiplomat setting, vulnerability has been tied to genetic variants less adept at defending against oxidative stress; and low concentrations of a critical antioxidant. In both groups, brain imaging studies resemble traumatic brain injury; and in both, at least some of those affected had prior head injury. Head injury may be a predisposing factor, as well as possible consequence. Reprising findings also shown for research on other lucrative products with potential to cause harm in some, there is a powerful tie between study results and financial conflict of interest (e.g. source of study funding or conflicts by authors). END_OF_DOCUMENT_TOKEN_TO_BE_REPLACED
Continue Reading
Author Interviews, Environmental Risks, JAMA, Pediatrics, Toxin Research / 29.08.2018

MedicalResearch.com Interview with: Joseph M. Braun, MSPH, PhD Associate Professor of Epidemiology Epidemiology Master's Program Director Brown University School of Public Health MedicalResearch.com: What is the background for this study? Response: Childhood lead poisoning continues to be a problem in the United States and residential lead hazards are the major source of Pb exposure in young children. However, no studies have attempted to prevent exposure to lead hazards through primary prevention. Thus, we randomized 355 pregnant women to a comprehensive residential intervention and followed their children for up to 8 years to determine if childhood lead poisoning and associated cognitive deficits and behavior problems can be prevented. END_OF_DOCUMENT_TOKEN_TO_BE_REPLACED
Continue Reading
Author Interviews, Dermatology, Environmental Risks / 04.08.2018 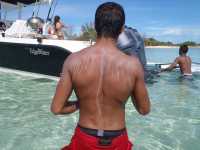 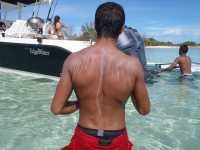 Adela J. Li, PhD Research Affiliate Wadsworth Center, Rm. D597 New York State Dept. of Health Empire State Plaza Albany, NY, 12201-0509 On the behalf of Dr. Kelvin Leung  MedicalResearch.com: What is the background for this study? What are the main findings?  Response: Most people love the beach. In order to block the sun’s damaging UV radiation, people generally slather on a thick layer of sunscreen against sunburn and skin cancer. Sunscreen is suggested to be re-applied every few hours regarding its effectiveness as well as being washed off into the water. These UV filters have been detected in the environment but most studies concluded that individual sunscreen chemicals pose no/low risk to animals or human. However, UV filters constitute a heterogeneous group of chemicals in sunscreens. We are wondering if combination of UV filters would induce higher toxicity than individual compounds, and whether these chemical interactions would develop over time, becoming increasingly dangerous to the living systems. Our study found seven of the nine UV filters in Shenzhen waters, China --- a rapidly urbanized city with over 20 popular recreational beaches, surprisingly, a reservoir and tap water. After exposing artemia to three dominant UV filters and then feeding these artemia to zebrafish adults, concentrations in both were up to 4 times higher when exposed to the mixtures than when exposed to only a single UV filter. A short-term of 25-day dietary exposure to the zebrafish adults did not appear to significantly influence early life stage development of the second generation; however, relatively long exposure over 47 days had significant adverse effects on embryo development. END_OF_DOCUMENT_TOKEN_TO_BE_REPLACED
Continue Reading
Author Interviews, Environmental Risks / 24.06.2018 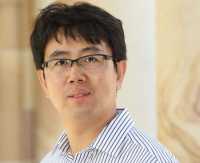 MedicalResearch.com Interview with: Dr Jianhua Guo PhD ARC Future Fellow, Senior Research Fellow Advanced Water Management Centre University of Queensland Brisbane Australia MedicalResearch.com: What is the background for this study? What are the main findings? Response: It was found that wastewater from residential areas has similar or even higher levels of antibiotic resistant bacteria and antibiotic resistance genes compared to hospitals, where you would expect greater antibiotic concentrations. Thus, we wonder whether non-antibiotic chemicals such as triclosan can directly induce antibiotic resistance, because triclosan could be ubiquitously detected in various water environments, like wastewater. We found triclosan found in personal care products that we use daily could directly induce multi-drug resistance through mutation. The discovery should be a wake-up call to re-evaluate the potential impact of non-antibiotic chemicals on the dissemination of antibiotic resistance. END_OF_DOCUMENT_TOKEN_TO_BE_REPLACED
Continue Reading
Author Interviews, Environmental Risks, Pediatrics, PLoS, Toxin Research / 19.06.2018

MedicalResearch.com Interview with: Cheryl Rosenfeld PhD DVS Professor of biomedical sciences in the College of Veterinary Medicine investigator in the Bond Life Sciences Center, and research faculty member for the Thompson Center for Autism and Neurobehavioral Disorders University of Missouri MedicalResearch.com: What is the background for this study? What are the main findings? Response: My laboratory has been examining the effects of developmental exposure to the endocrine disrupting chemical (EDC), bisphenol A (BPA) on later neurobehavioral responses in a variety of rodent models, including California mice. This species is unique in that both parents rear the pups and they have monogamous social structure, similar to most human societies. We had previously found that developmental exposure to BPA or another EDC, ethinyl estradiol (EE), disrupted later maternal and paternal care by F1 offspringto their F2 pups. Rodent pups use vocalizations both in the range of human hearing (20,000 hertz or below) and outside of the range of human hearing (20,000 hertz) to communicate with each other and their parents, and for the latter, such communications serve as a trigger to provide additional parental care in the form of nutrition or warmth to the pups. Thus, in the current studies we sought to determine if exposure of the grandparents to BPA or EE could lead to disruptions in their grandoffspring (F2 generation) pup communications that might then at least partially account for the parental neglect of their F1 parents. We found that early on female BPA pups took longer to call to their parents but later during the neonatal period they vocalized more than pups whose grandparents were not exposed to either chemical. Such vocalization changes could be due to multigenerational exposure to BPA and/or indicate that the pups are perceiving and responding to the reduced parental care and attempting but failing to signal to their F1 parents that they need more attention. END_OF_DOCUMENT_TOKEN_TO_BE_REPLACED
Continue Reading
Author Interviews, Environmental Risks, Infections, Pediatrics, Respiratory / 18.04.2018

MedicalResearch.com Interview with: Benjamin D. Horne, PhD Director of Cardiovascular and Genetic Epidemiology Intermountain Heart Institute Intermountain Medical Center Salt Lake City, Utah  MedicalResearch.com: What is the background for this study? Response: Evidence suggests that short-term elevations (even for just a few days) of fine particulate matter air pollution (PM2.5, which is particulate matter less than 2.5 um or about one-thirtieth the diameter of a human hair) is associated with various poor health outcomes among adults, including myocardial infarction, heart failure exacerbation, and worsening of chronic obstructive pulmonary disease symptoms. Studies of long-term exposure to moderately elevated levels of PM2.5 indicate that chronic daily air pollution exposure may contribute to death due to pneumonia and influenza. Research regarding the association of short-term elevations in PM2.5 has provided some limited evidence of a possible association between short-term PM2.5 increases and infection with respiratory syncytial virus (RSV) or bronchiolitis in children, but scientifically these reports have been weak and unreliable, probably because they have only looked at a period of a few days to a week after short-term PM2.5 elevations. An evaluation of a very large population in a geographic location that provides a wide variation in PM2.5 levels from lowest to highest levels and that examines longer periods of time after the PM2.5 elevations is needed to determine whether a PM2.5 association with lower respiratory infection exists. END_OF_DOCUMENT_TOKEN_TO_BE_REPLACED
Continue Reading
Author Interviews, Autism, Environmental Risks, JAMA, Toxin Research / 10.04.2017

Excessive Rainfall May Be Linked To Autism Through Nitrous Oxide Exposure

MedicalResearch.com Interview with: Keith Fluegge BS Institute of Health and Environmental Research (IHER) Cleveland Graduate School, The Ohio State University, Columbus Ohio MedicalResearch.com: What is the background for this study? What are the main findings? Response: The research letter discusses the possible link between rainfall precipitation and risk of autism. Earlier research suggested a link, although there remained quite a bit of skepticism surrounding the findings at the time. The purpose of the study was to briefly highlight the role of environmental exposure to the agricultural and combustion pollutant, nitrous oxide (N2O), as a possible etiological factor in neurodevelopmental disorders. We have published a series of epidemiological investigations, reviews, and correspondences discussing this possibility. In my continued research on this topic, I learned that rainfall and extreme weather-related events, like hurricanes, drive N2O emissions, especially from nitrogen amended soils. Exposure to this particular air pollutant may, therefore, plausibly undergird the relationship between rainfall precipitation and risk of autism. END_OF_DOCUMENT_TOKEN_TO_BE_REPLACED
Continue Reading
Author Interviews, BMJ, Environmental Risks, Mental Health Research, Pediatrics, Toxin Research / 02.03.2017

Environmental Pyrethroids May Be Associated With Behavioral Problems in Children

MedicalResearch.com Interview with: Professor Jean-Francois Viel Department of Epidemiology and Public Health University Hospital Rennes, France MedicalResearch.com: What is the background for this study? What are the main findings? Response: The use of pyrethroid insecticides has increased substantially throughout the world over the past several decades, replacing organophosphate and carbamate insecticides, because of their chemical potency against many pests, their relatively low mammalian toxicity and their favorable environmental profiles. However, despite the neurotoxicity of these insecticides at high doses, the potential impact of environmental exposure to pyrethroid insecticides on child neurodevelopment has only just started to receive attention. Using a longitudinal design (PELAGIE mother-child cohort), we were able to assess pyrethroid exposure (trough urine concentrations) both prenatally and during childhood (at 6 years of age). We showed that increased prenatal concentrations of one pyrethroid metabolite (cis-DCCA, a metabolite of permethrin, cypermethrin and cyfluthrin) were associated with internalising difficulties (children showing behaviours that are inhibited and over-controlled). Moreover, for childhood 3-PBA (a common metabolite of up to 20 synthetic pyrethroid insecticides) concentrations, a positive association was observed with externalising difficulties (children showing behaviours that are under-controlled and having generally a more challenging temperament). END_OF_DOCUMENT_TOKEN_TO_BE_REPLACED
Continue Reading
Author Interviews, Brigham & Women's - Harvard, Environmental Risks, Toxin Research / 10.08.2016

MedicalResearch.com Interview with: Courtney C. Carignan PhD Research Fellow Department of Environmental Health Harvard T.H. Chan School of Public Health MedicalResearch.com: What is the background for this study? What are the main findings? Response: We used mapping technology coupled with drinking water data from EPA to identify military bases, airports, industrial sites, and wastewater treatment plants as major sources of PFOS and PFOA contamination in drinking water. These measurements suggest that at least six million people have drinking water that exceeds the recent EPA health advisorylevels for PFOA and PFOS. These are chemicals that have been historically manufactured in the US and used widely in consumer products such as stain-proof carpeting, non-stick pans and aqueous firefighting foam. They have been replaced with new generation of shorter-chain fluorinated chemicals, which also do not break down in the environment and may be similarly toxic. END_OF_DOCUMENT_TOKEN_TO_BE_REPLACED
Continue Reading