Response: Anecdotally, we heard from former NFL players that they felt older than their chronological age. At the same time, doctors and medical care providers treating former players also observed that players appeared clinically older in some health domains. These observations motivated us to ask:  despite superior fitness and success as young men, are football players experiencing early aging and living with illness and disability for more years than their non-football peers?

Response:  We found that a number of conditions associated with aging are occurring significantly earlier for former NFL players including diabetes, hypertension, dementia/Alzheimer’s Disease, and arthritis when compared to American men of the same age, race and BMI. While we understand why these conditions might be more prevalent (e.g., as the result of orthopedic or head injury), it is noteworthy that the premature occurrence of these illnesses will detrimentally affect players for more years than their non-NFL peers. Overall, the number of years free from chronic illness is reduced in former players, such that former NFL players lose approximately 10 years of healthspan (see Figure below). 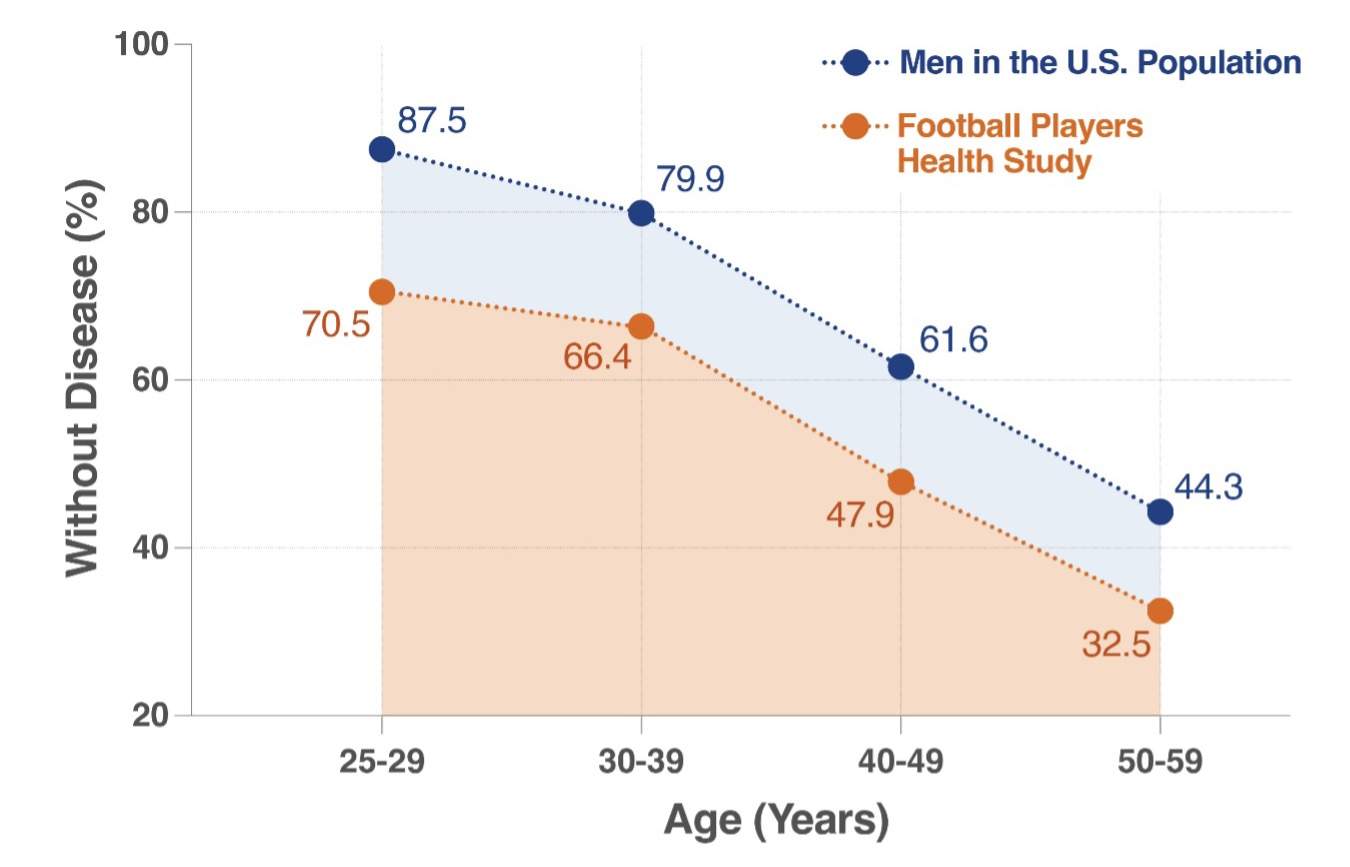 Response: We want to support current and former professional athletes to be proactive about their long-term health cardiovascular, metabolic, musculoskeletal, and cognitive health. We encourage anyone experiencing cognitive symptoms to reach out to their primary care provider or a neurologist to determine whether other conditions like sleep apnea, mood disorders, or specific medications may be contributing to cognitive dysfunction. Athletes and non-athletes can stay healthy and extend their lifespan and healthspan by maintaining a social network, healthy diet, and exercise routine.

In terms of clinical practice, we hope that this paper motivates physicians and others who provide medical care for former players to pro-actively screen even young post-career players for these conditions. Efforts to prevent and treat the cardiometabolic conditions early in life could have important protective neurological and cardiological implications for later-life health.

Response: By highlighting the need to identify young and middle-aged players who may harbor conditions of interest, this study lays groundwork for future interventions (pharmacological, procedural, and behavioral) that could lead to positive changes in both length and quality of life in former professional athletes. Research that examines established biochemical, cellular, and physiologic signatures of aging in this former professional football players may also yield important insight for post-career player health.

I have no disclosures to add.