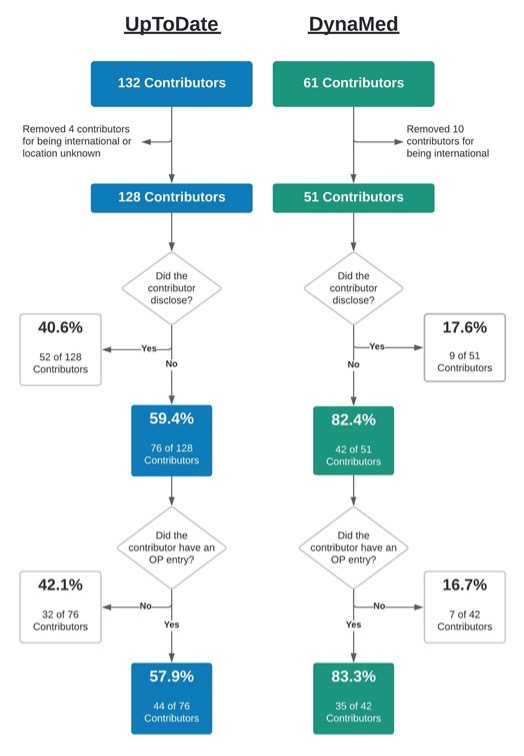 Response: Health care providers utilize subscription-based, point-of-care databases such as DynaMed and UpToDate to provide clinical care guidance and remain current on the latest evidence-based findings. Both of these websites maintain this content through a cadre of physician contributors who write and edit articles for these sites. These physician contributors are required to self-report any conflicts of interest (COI) as outlined by the respective policies on each website. However, prior COI research into similarly self-regulated areas, such as medical and pharmacology textbooks, and clinical practice guidelines, has found both appreciable potential COI and inconsistencies between self-reported and industry mandated disclosures (1-3).

This study (4) explored the accuracy of physician contributors to DynaMed and UpToDate by comparing their self-reported disclosure status with the financial remunerations they received from the healthcare industry (e.g., pharmaceutical companies) as reported to the U.S. Centers for Medicare and Medicaid Services’ Open Payments database. Physician contributors who reported “nothing to disclose” on their respective article topic but had an entry on Open Payments for having received money from industry, were classified as discordant and, thus, as having the potential for a COI. Additionally, total remuneration, gender, and payment category were investigated more in depth for each database.

Of the 179 contributors reviewed, 50 were women. Women contributors to UpToDate and DynaMed received 2.5% and 17.3%, respectively, of the total remuneration from the healthcare industry. Women contributing to UpToDate were statistically less likely to have an Open Payments entry than men (chi-square = 24.32, p < .001). However, there was no gender difference among DynaMed contributors.

Response: An appreciable amount of industry money was received by physician contributors to both DynaMed ($3 million) and UpToDate ($5 million) who self-reported nothing to disclose in their article. It is possible that such payments could have resulted in a COI, biasing the content provided by these popular, evidence-based medical websites. These websites are utilized by health care providers in providing clinical care. This paper’s findings of rates of discordance are similar to a different investigation of content contributors to Medscape, another online medical database (1). Quantifiable research in the areas of bioethics, medical authorship, and COIs needs to continue.

Response:  This report adds to a large body of evidence that self-reported COI should be treated with substantial skepticism (1, 3). The U.S. Centers for Medicare and Medicaid Services’ Open Payments database is easy to use. We recommend health care providers, journalists, and patients regularly verify any self-reported COIs. We would also encourage point-of-care database editors to complement self-reported disclosures with a prominently placed link to Open Payments for every contributor in order to sustain the reader’s trust that these resources have maintained the highest ethical standards.Citations